Greetings, it is Monday, September 6, 2010 and I am typing this on my Toshiba Netbook because I did not bring my full size laptop with me.  We spent the weekend up in Palatka with both our sons, our daughter in law and our wonderful grandson, Elijah.

We are watching a movie, enjoying a quiet afternoon while we wait for our daughter in law to come home from work today.  We have been fortunate that she has been off most holidays but the medical field works round the clock and this time it was her turn to work a holiday.  We will have dinner together and perhaps watch a good movie tonight.

THOUGHT FOR THE WEEK
“The most difficult thing is to know ourselves;
the easiest is to speak ill of others.”

FLORIDA MAGICIANS LEADS THE CHARGE TO SAVE A FRIEND 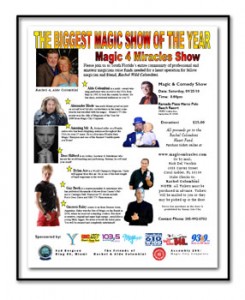 MIAMI, FL: September 2, 2010 — Among magicians, Rachel Wild Colombini is known worldwide, both for the array of magical materials and illusions she offers at conventions throughout the world, and for her grace and beauty. She is married to a very lucky magician, also known throughout the magic world, named Aldo Colombini.

Now Rachel needs a helping hand to continue her life. Rachel needs a heart valve replacement. The cost of surgery and expenses could exceed $200,000.00. Born with a congenital heart defect that was controlled by medication, for many years the condition was easily controlled.

But three years ago, Rachel contracted a life threatening infection that spread to the heart valve. The infection endocarditis damages the valve even further, and many do not recover from this condition without surgery. Rachel was treated in 2007 for this and made a recovery but the valve suffered lesions.

Patients who have had this infection once are increasingly susceptible to recurrent infections. On April 26, 2010, Rachel was

Aldo & Rachel took an emergency flight back to the US after canceling a month of shows. She was treated for six weeks and the antibiotics controlled the infection again. Cardiologists have advised that another bout of the infection could be fatal and that valve replacement is necessary. Although Rachel and Aldo do have some health insurance, the cost of open heart surgery, plus loss of work puts this option out of reach at the moment.  Each day that surgery is delayed, the danger grows for Rachel.

Enter Rick Del Vecchio, who for many years has served as the executive producer of the annual Magic On The Beach events for IBM Ring 45, along with fellow South Florida Magicians, has put together a one night only fundraiser for their dear colleagues and friends, the Colombinis. “ Rachel and Aldo are two of the most revered people in the magic world. They have worked tirelessly to help others throughout the world and this is our chance to make a difference in their lives.” said Del Vecchio.

The show, Magic 4 Miracles is a Magic and Comedy Show, scheduled for Saturday, September 25, 8:00 p.m. at the Marco Polo Beach Resort. The line-up is impressive, and includes:

All performers are donating their services to help raise funds for fellow magician and friend, Rachel Wild Colombini. The resort is located at 19201 Collins Ave. in Sunny Isles.Tickets are $25.00 each and can be purchased online at www.magic4miracles.com or by mail to  Rick Del Vecchio, 1005 Cortez Street, Coral Gables, FL 33134. Rick’s contact phone number is 305-992-0703. Checks should be payable to Rachel Colombini. Tickets must be purchased in advance. Tickets will be mailed or they may be picked up at the door. Sorry but the City of Sunny Isles does not permit ticket sales at the door.

Hello maria this is solyl once again!

I’m glad to report you my return to normal life after one and half month’s confinement to hospital bed and one more month’s captivity in my home under physical therapist. Only on 1st of this month the doctors and the physical therapist have declared me as normal and fit for outdoor work.

I’m already planning a lecture tour in usa in 2011 before ibm convention. due to the accident i couldn’t go out this year but god willing I’ll sure make it in 2011.

I need your help and wonder whether you’ll oblige me.I request you to help me providing the contact e-mail of persons who book lectures if you know. I’ll remain thankful.

Hope all is well with you. btw, eagerly waiting for the coming issue of tmt 🙂

NOTE:  TMT = The Magic Touch.  Solyl is a regular contributor to the magazine. If you would like to receive a copy just send an email to merlina17@aol.com. Subscription is free. 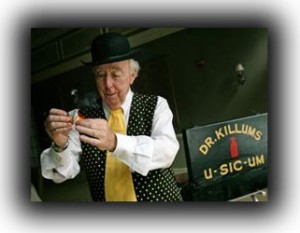 The best magic trick Al Callus ever saw was one he performed at age 13 — and it will never be duplicated. [Al Callus, left, of Boonton has returned to performing magic.- Staff photo: Karen Mancinelli]

The basic trick is a familiar one: The magician pours milk into a cone made out of paper, and the milk vanishes. “It’s a trick every kid learns,” he says.

We heard from Mount Sinai hospital again today and we have an appointment for Sept 29th. with the chairman of Cardiothorasic surgery Dr Adams.

We will fly out of Miami as it is a direct flight (less health risk) amd much cheaper than out of Tampa. Also Aldo will be performing at the benefit show in Miami a couple of days before so that worked out well.

We  booked the flights today , we were also strongly advised by the hospital to take travel insurance due to the health risks, which we did.

Hopefully we are going to try and schedule surgery for Dec/Jan if funds allow.

Just wanted to give you a quick update.

The date to the Spring Council Meeting in Orlando Florida has been changed to March 5, 2011.  Please update your calendars.  Hotel and particulars TBA.

The Linking Ring boasts the largest circulation of any printed magic magazine and now has launched a beautiful digital edition. I.B.M. membership is required to receive this monthly magazine. Members can access The Linking Ring at www.magician.org, allowing portal entry into the exciting world of magic!

Convention coverage continues this month with more candid reviews of the the 82nd Annual I.B.M. Convention, including lectures, Order of Merlin events, and Linking Ring Awards.

“The Silent Magic of Sam Sandler” is an article written by Dr. Simon J. Carmel, honoring the indomitable spirit of Mr. Sandler who lost his hearing five years ago. Hearing loss hasn’t slowed down this remarkable man’s performances — not one bit!

Some of the articles in this issue of The Linking Ring include the continuing Youth Trivia Contest which always provides some excellent historical facts and gives youth members a chance to win terrific prizes.

“Millennials Rising – Magic Stars of Tomorrow,” is a terrific monthly youth column by Cliff Bumgardner. This month he features the stage magic of Megan Knowles-Bacon.

This month’s Parade features our cover magician, Giacomo Bertini, an Italian star magician. This man’s coin magic is as original as it is amazing! His presentations for the classic “Portable Hole” is must reading for coin magicians!

Mike Power’s “Card Corner” presents a Stacked Do As I Do effect by the talented John Carey. This is an extremely deceptive routine.

Tom Craven’s “Havenly Close-Up” presents a very clever method for a “hold-out” for which magicians will find many uses.

“Storytelling Magic” by Ed Solomon presents another wonderful escapade by Ed’s alter-ego, DeNomolos. This one will freak out the spectators!

“Hocus in Focus” presents many reviews of new magic that will help magicians determine the best buys!

Space does not permit me to list all of the wonderful articles and magic in The Linking Ring, but each month you’ll find over 160 pages of magic and the latest from dealers from around the world.

ADVERTISERS! — Your products will enjoy unsurpassed, worldwide promotion in The Linking Ring through a beautifully printed magazine, a dazzling digital edition, and links on the I.B.M. Web Portal!

For details about advertising in The Linking Ring, contact BJ Hickman, at advertising@magician.org. 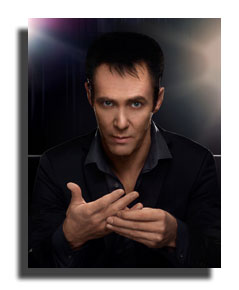 9/4/2010 – When the curtain comes down tonight on Lance Burton’s nearly 15-year-long run, he has absolutely no firm ideas as to what he’s going to do next.

In fact, he’s really not going to even think about it until after football season ends with the Super Bowl next February.

“This is the end. I have no idea what’s next. I simply don’t have a clue,” he told me candidly.

But the master magician knew his mind-boggling statistics instantly when I asked him for them: He performed more than 5,000 shows at the Monte Carlo for more than 5 million people, and the show grossed more than $200 million during the incredible run. Before the lengthy and unprecedented Monte Carlo engagement, he appeared at the old Hacienda. So during his entire career to date in Las Vegas, he’s amassed an incredible 15,000 shows.

AUSTIN, TX -If you are out and about this weekend, you might see something a bit out of the ordinary, even for a city that prides itself on being weird. Hundreds of mind readers, escape artists, illusionists and other practitioners of magical arts will be descending on Austin for the 67th annual conference of the Texas Association of Magicians , which goes on through Monday at the Sheraton Austin Hotel .

As America’s hottest illusionist, Jason Bishop might have a person passing through his body one moment or make goldfish appear from nowhere the next. Bishop is an international award-winning illusionist who was the youngest person to win the Magician’s Alliance of Eastern States Stage Award and one of the youngest people to compete in the Society of American Magicians World-Class competition. 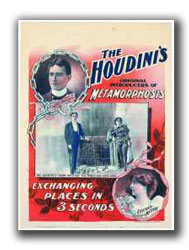 It was the greatest trunk mystery the world had ever seen. That’s what the advertising handbill called it.

“The Houdini’s Original Introducers of Metamorphosis. Exchanging Places in 3 Seconds,” the poster said.

Magician Ariann Black tells audiences that when she was a child, her mom took her to a store to buy her first magic trick. The man behind the counter said, “Magic is for boys, not girls. Why don’t you buy your girl a nice doll?”

So sexist it was. And now we know what he should have said instead:

The greatest magician of all time was Merlin. He lived, if indeed he lived at all, in Wales and southern England during the dawn of Christianity in those lands, long before written historical records were kept, yet his name is universally recognized around the world as synonymous with magic, and his popular image is almost as well known as that of Santa Claus. Speak the name Merlin, and immediately an image springs into the mind of an old man with a flowing white beard and bushy white eyebrows, dressed in a midnight blue robe and tall conical hat covered with stars. He is the prototypical wizard.