Greetings, what a week this has been! Not only have we been thrilled that our son Orlando has been with us, but we have been extremely busy with all the events of the week and the celebrations of Marine Corps Birthday as well as Veteran’s Day and other military tributes.  There were dinners, lunches and more that we attended but none more special than the following. 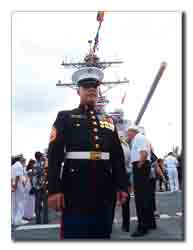 History was made this Saturday, and we were both happy and proud to have been a part of it.  We were guests at the commissioning of the USS Jason Dunham DDG109.  The ship, named after a young, 22 year old Marine who died as a result of a heroic act in Iraq when he jumped on a live grenade, shielding his men with his helmet and body.  He is the first to receive the Congressional Medal of Honor since the Viet Nam war and the first Marine to receive it for the OIF (Operation Iraqui Freedom).  It was an honor to meet his parents and his commanding officer at the time as well as the Captain of the ship.  Semper Fi – Semper Fortis to the men and women who are bringing life to the ship and may they only experience fair winds and following seas. 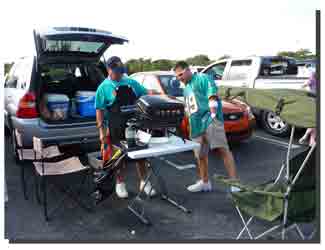 Sunday we attended the Miami Dolphins game.  The game was dedicated to the crew of the USS Dunham, all of whom were in attendance at the game.  The morning started with a tail gate party in the parking lot and ended well into the evening after enjoying not just the game but a fun day with our son and Alexander Blade and his family who joined us at the stadium as well as many other friends we saw at the game.

“Reputation is what men and women think of us;
character is what God and angels know of us”

There is a meeting every Thursday in Miami.  Meetings are held at the Elks Lodge as follows: 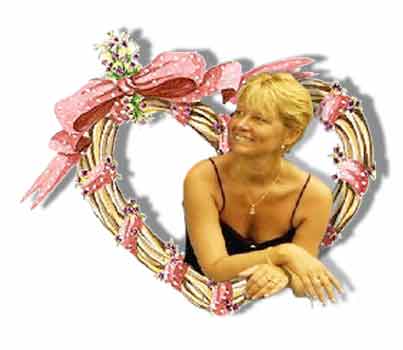 Hi everyone,this last week was extremely tough as Aldo’s mother passed away unexpectedly Wed Morning and under normal circumstances we would have gone to Italy to be with his daughter but because of the situation and my health we could not fly to Italy.

Aldo was very good about this and I understand how hard this has been for him. Thanks to all those who sent condolences.

We will fly to NY Wednesday and then I have surgical testing all day Thurs, a brain scan and blood work. The operation will be Monday the 22nd. It is hard for me right now to know what to say, I know that I must stay positive and to believe that the outcome will be ok.

Please do not judge me for this momemt of weakness, but in case of the worst cenario, I want you all to know that I could never have asked for a greater response and love that has been outpouring from the magic world. I will do everything in my power to be back and be able to do the magic that I love so much and to continue my life with a man that has given me so much joy.

Even if this is not the case then please know that I am eternally grateful for what everyone in the magic world has done for me.

Please pray for me and know that you are a great source of strength.

If there is a slight delay in news updates from Aldo’s end because he is at the hospital do not worry Maria will keep ypu updated.

All my love to you all,

There are also sponsorship opportunities with preferred seating and a fascinating pre-show “up close and personal” performance.

Tickets for children ages 13 and over are $20; children ages 6-12 are $10; under age 6 are free but must reserve seats.  You can purchase your tickets or inquire about sponsorship opportunities by calling our office at 888-546-6042 or go to www.midsouthlions.org to order tickets securely online.

All proceeds will provide miracles for children through St. Jude and provide the precious gifts of sight and hearing to those in need through Mid-South Lions.  Together we’ll truly be making Magical Miracles in Memphis!

For more information about BRIAN STARON please visit www.brianstaron.com  Brian has videos on YouTube and an extensive Facebook fan club.

Come to Las Vegas on Monday, December 6th! The Fantasma Ring #257, Las Vegas of the International Brotherhood of Magicians is proud to make Milt , Irene and in memory of Bill Larsen Jr. their Magician’s of the Year.

The whose who of magic have gotten together and are ready to put on the most magical and memorable show filled with many celebrity performances and appearances including Siegfried. The show stars: Mac King as MC, Jason Byrne, Aye Jaye,  Max Maven, Luna Shimada, The Amazing Johnathan, James Dimmare, The Great Throwdini and Kevin James with surprise guests not to be missed.

The show/Tribute takes place at the Orleans Hotel in Vegas. Mention code number OIBMC12 to get a room rate of only $38! Ticket sales for Magic Castle or Ring 257 Members are only $55. Non Members $100. VIP seats $150. Youth $25. For more information, visit www.ibm257.com  The Larsen’s are the most magical family and we are excited to produce a very special night for them and you as well. The show is produced by Roger Dreyer of Fantasma Magic as well as the members of the Fantasma Ring 257, Las Vegas

PITTSBURGH CONCENTRATES ON THE WINNERS

The Saturday Night Gala at the upcoming S. A .M. Convention will feature a battery of  winners.

Remember the great IBM./SAM Convention  in  Louisville ?   Who was it that walked away with the  $10,000 Stage  Award ? The same guy who won the top award at the World Seminar earlier that year.  Yes .  It was that Korean guy whose  great original card manipulations won him third place at FISM last summer.-   His name is An Ha Lim.  We proudly announce that he will  join  a battery of many other “Award Winners”- When?  July 13-16 2011 in Pittsburgh.   See a sneak preview of some other acts already booked  Visit  http://www.magicsam.com/SAM2011    Register now. Rates go up in March.

Science and magic
Ladies and gentleman, feast your eyes on the first ever book about the neuroscience of illusion

For neurobiologists Stephen Macknik and Susana Martinez-Conde, what happened in Vegas, left Vegas and made it into the pages of their new book Sleights of Mind, a 300-page tour through consciousness, attention, and deception via the marriage of professional magic and cognitive neuroscience

For years, researchers have studied the keen eye of painters to help understand the visual system and perception. But “magicians are artists of cognition,” who use attention and awareness as their preferred media rather than paint or clay, says Martinez-Conde. 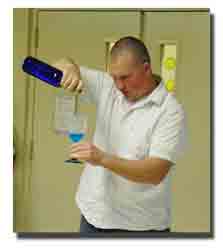 CHAMBERSBURG, PA — After two years, David Bowers pulled off the magic trick of his career — organizing an assembly in Chambersburg of the world’s oldest magic society.

“I’m really excited about it. To bring magic to Chambersburg is just so exciting to me,” said Bowers, who is also the mid-Atlantic Regional vice president of the Society of American Magicians (SAM), the oldest magic organization in the world with more than 10,000 members.

For more than two years, a group of magicians and those interested in magic have met at Bowers’ home in Chambersburg on the fourth Thursday of every month at 7 p.m.

But, the 64-year-old Bowers wanted to take the “club” to the next level and give it the prestige of having affiliation with the national fraternal organization.

SAN LEANDRO, CA – Local magician Richard Stewman has opened a new magic shop in Washington Manor, where he performs live demonstrations and sells magic tricks for people of all skill levels. JJ’s Magic Shop is named after local realtor Joe J. Litvinchuk, who owns the store and is also a part-time magician.

Years ago, Litvinchuk inspired a young Stewman to try the ways of magic, and taught him many of his early tricks. Now Stewman performs regularly in a magic and comedy act, which entertains audiences both young and old.

Comedy magician Michael Finney is looking forward to his first performance in Bay City as part of The Vaudeville Show on Wednesday.

He’s just not too sure about Michigan weather.

“I’m hoping it’s not too cold up there,” he said. “Cold gets to me fast … I live in the desert.” That’s the desert of Phoenix, Ariz., which is his home base.

But even in the face of cold temperatures, rain clouds or snow showers, Finney, who has been in the business for 30 years, promises his audience a good time. In fact, he says, bring along the whole family. While he wouldn’t reveal his exact plans, he vows to take care of the crowd 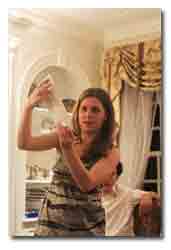 New Haven, CT – On top of Quidditch and Gothic architecture, Yalies have another reason to relate to Harry Potter: the newly formed Yale Undergraduate Magic Society.

Three members of the Magic Society — Jen Kramer ’14, Micah Johnson ’13 and Seth Thompson ’14 — performed magic tricks for an enthusiastic crowd of over 60 people in the Pierson master’s house Tuesday afternoon.

“We’re here today to show you some magic/ We won’t cut you in half/ That would be kind of tragic,” rapped Kramer as she introduced her group, and some members of the audience beat-boxed along with her. Kramer described magic as something that “takes the impossible and makes it possible.” The magicians focused mainly on card tricks that drew applause and sounds of amazement from the audience. Several magic tricks — or “magic effects,” as Kramer called them — stood out to audience members. 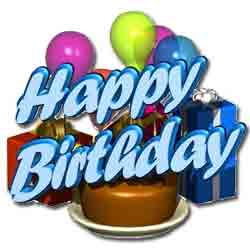