Greetings, here we are with the next to last issue of Have you Heard? For the year 2010, it is hard to believe that these mailings started out over 10 years ago and have grown from a readership of a handful of friends who were interested in updates and in receiving news as it came across and has grown to a readership in the tens of thousands with more subscribers coming in daily.  THANK YOU for your continued support and for sharing the news that they may be passed on and shared with others. 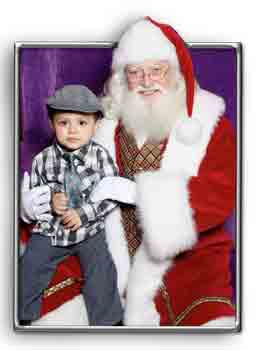 For those who have been following the posts on Facebook, yes, our tree is finally up and decorated.  Not sure whether or not Santa will find us this year since we seem to be living on the road commuting between Palatka and Miami.  There is a fireplace and chimney in Palatka but not in Miami so hopefully he will be able to figure out how/where to arrange for presents.

As Christmas approaches we would like to send you the best wishes for a wonderful and blessed Christmas holiday season and a hope that health and happiness are among the two largest presents you receive.

“Nearly all men can stand adversity,
but if you want to test a mans character, give him power.”

There is a stellar line-up for the show which is being headlined by Jonathan Levit.  And will feature three additional surprise performers that will “knock your socks off”!

Jonathan Levit is known as an, actor, television host and magician. He first received notoriety for his starring role in “The X-Files”, playing opposite Ricky Jay.  He has since gone on to appear in numerous films and guest starring roles on television.

Currently, Levit can be seen in his role as Martin Dewey, the LA County Coroner in FLASH FORWARD (ABC).In addition to his acting roles, Jonathan was the host and a judge on VH1’s magic reality series – CELEBRACADABRA. He has also hosted shows for The Discovery Channel (MIRACLE HUNTERS, WIRED NEXFEST), Equator HD (GREEN WHEELS), The Science Channel, The Biography Channel (PARANORMAL U.S.A.) and the Fine Living Network (GREEN WITH ENVY).

Currently, Jonathan is producing and hosting a new series for kids, entitled
CAREER DAY – a video series which exposes kids to fascinating, important, and cool careers, intended to open their minds to exciting worlds they may not normally see. This series is dedicated to inspiring the dreams in all of us while instilling the importance of a good education.

Jonathan will also be providing a lecture which will be FREE of charge to Magic City Conjurers members and members of S.A.M. 280 in good standing who attend the banquet on the 29th and to those members in good standing of I.B.M. Ring 45 who attended that banquet.  All others will pay $20.00 to attend.  The lecture will be on Thursday, January 27th.

We wish you Happy Holidays!

As a short reminder to all of our friends who attended the I.B.M. Convention in San Diego,  you won’t want to miss all of the exciting new changes we have in store for you in Dallas on June 28-July 3, 2011!   You’ll have to see it to believe it!!!

Hi everyone, first of all a big thanks for all the continued thoughts and prayers. It is amazing just how many.

I am getting better everyday and now walk about a mile and a half each morning although I do shuffle along like a 90 year old:) Aldo is a very accomplished housekeeper now, vacuuming, laundry, cooking, cleaning the bathrooms etc. He says that he never realised just what kind of work women had to do and says he much prefers being a guy:)

We even had a few friends over for a small Christmas party Saturday night, it was great fun and of course great cuisine from Aldo (7 courses of Italian food!!). I slept most of the afternoon before the party so that I would have the energy to participate and it was really great. Thanks to those who came and enjoyed this very special time with us.

From our hearts to yours.

God Bless you all! 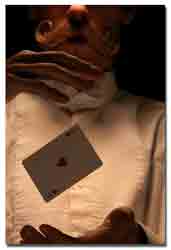 SEATTLE,WA – Crandal’s Bag is about magic. Not the flashy legerdemain with which illusionists seduce their audiences, but dreadful magic that makes magicians into outcasts. And more than that, it is about the magic of the theater itself.

Kyle Loven’s play is an intense eighty minute solo performance, telling the story of Crandal, a stage magician. Yet Crandal is not simply a stage magician. He is also a sin-eater, the last in a long line spanning at least a thousand years, and possibly back to the Garden of Eden itself. Like all sin-eaters, he is a pauper and pariah, whose only comfort is collecting things that are, like him, cast away.

Magic Shop has illusions, gags for all ages
By CHRISTINA WILLARD • For the Courier-Post 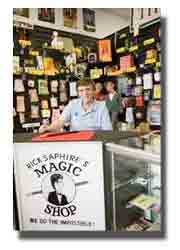 Cherry Hill, NJ – It’s not every store that sells the world’s largest puke. Rick Saphire’s Magic Shop in Cherry Hill also is your source for whoopee cushions, fake dog poop, stink perfume and many other classic novelty items. Just who is buying this stuff? It’s not the kids.

Saphire, the owner of The Magic Shop, has been in the business for 30 years and says only one-third of his clientele are youngsters.

But the shop sells more than gags: Saphire, a professional magician and talent manager, trades in illusion from pocket-sized tricks to magic show-caliber spectacles. He’ll even demonstrate a trick or two for customers.

Winona barber has a few tricks up his sleeve
By Alyssa Pederson | winonadailynews.com 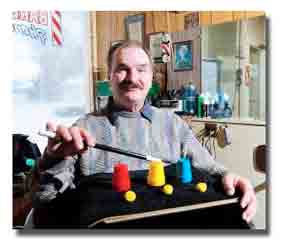 Winona, MN – Barber Tom Schneider is swift with scissors, but he also has a few tricks up his sleeve. Tom, 59, a barber for 31 years, serves 10 to 15 customers a day at Tom’s Barber Shop at 475 West Seventh St. And some of his regulars have discovered his secret trade — as a magician.

“It’s fun to entertain people,” Tom said. “I’m the only barber in town that entertains his customers with magic tricks.”

Tom likes to keep magic as more of a hobby than a side job. Those in the know of his special talent found out by “word of mouth

Roger Quan
NY Daily News
No trick to Rogue Magic and Funshop
– only oodles of customers
BY Nicholas Hirshon
Photo by: Gabel for News

Quan reached for a deck of playing cards. Then he asked a visitor to pick one without showing him – a jack of clubs – memorize it and place it back in the pack.

Moments later, the same card magically rose from the deck. And Quan had won over yet another patron.

“The first time you do a trick, you get hooked because of the reaction of people,” he said with a grin.

This Christmas, while some will be pinching the pennies, a small group of London tricksters will be busy performing their best tricks to packed-out parties every night of the week — for around £800 a gig.

Watched by swarms of celebrities, including John Cleese, the royal family and Johnny Depp, these magic men can make watches disappear or change money to poker chips. Last week, Theo Fennell hired 30-year-old Piff the Magic Dragon — real name John van der Put — to perform at his Christmas party. Van der Put agrees that December has been a busy month. “Right now I am enjoying travelling up and down the country doing three gigs a day,” he says. This December, the real Harry Potters of London are proof that the parties are in no danger of stopping soon. Here are the men who can make yours pop

Aurora Illinois – David Alexander had one motto that guided his life. “He always said, ‘Your belief is your most important possession because, wherever you put your belief, your entire life follows,” said Shawn Carlson, Alexander’s best friend and former colleague at Aurora’s SciTech Hands On Museum

David Alexander daily accomplishes his life’s goal of “doing interesting things.” A professional magician for much of his adult life, magic has taken him to places and introduced him to people he would not have otherwise met. It has also given him a second career as a published author and a third as a successful