Greetings, the wonders and miracles of Christmas are behind us and will live on as pleasant memories in our minds as we now look forward to New Years and the beginnings that January 1st will bring with it. 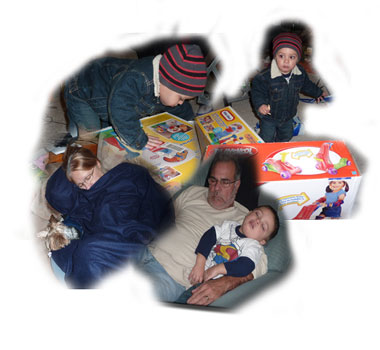 It is our fervent hope that each of you had a wonderful holiday, in whatever form you celebrate, and that the greatest of all the gifts you received was health…..with health you have everything else you need.

We spent Christmas enjoying the marvels of the season through the eyes of a child as we enjoyed the smiles on Elijah’s face as he ripped wrappings and discovered the wondrous items inside the colorfully wrapped packages.

Our resolutions are in place for the New Year and 2011 will see many positive changes in ourselves and in our lives.  Looking forward to those.  Hoping next year will be healthy, happy and prosperous for all.

Saturday, January 29, 2011here is a stellar line-up for the show which is being headlined by Jonathan Levit.  And will feature three additional surprise performers that will “knock your socks off”!

Jonathan Levit is known as an, actor, television host and magician. He first received notoriety for his starring role in “The X-Files”, playing opposite Ricky Jay.  He has since gone on to appear in numerous films and guest starring roles on television.

Currently, Levit can be seen in his role as Martin Dewey, the LA County Coroner in FLASH FORWARD (ABC).In addition to his acting roles, Jonathan was the host and a judge on VH1′s magic reality series – CELEBRACADABRA. He has also hosted shows for The Discovery Channel (MIRACLE HUNTERS, WIRED NEXFEST), Equator HD (GREEN WHEELS), The Science Channel, The Biography Channel (PARANORMAL U.S.A.) and the Fine Living Network (GREEN WITH ENVY).

Currently, Jonathan is producing and hosting a new series for kids, entitled CAREER DAY – a video series which exposes kids to fascinating, important, and cool careers, intended to open their minds to exciting worlds they may not normally see. This series is dedicated to inspiring the dreams in all of us while instilling the importance of a good education.

I’m happy to announce that I’m signed on for one more year with Ringling Brothers and Barnum & Bailey Circus! Didn’t get a chance to see the show last year? Well now you can see it in 2011!It’s hard to imagine that it has been more than one year since we packed up and left our Orlando Home and hit the road. We left on Thanksgiving 13 months ago and haven’t looked back!

NOTE:  He is working on a new show with Jim Steinmeyer…looking forward to great things from those two minds working together.

What are you doing New Years Eve?

Whatever your plans for the celebration… make sure that by the time you go out, you’ve registered for the Dallas 2011 I.B.M. Convention.  With so many changes in store, it’s the magic convention to attend in 2011.

New talent, new events, new format, new venues… you’ll have to experience it to believe it!

By registering before December 31, you will save up to $145 per person, as the pricing jumps to the next pricing tier after the first of the year.  So, if you haven’t taken advantage of this discount registration yet, do it now!

So what is new you ask?  Up until now we’ve been fairly tight lipped about many of the plans. But we want you to know what’s in store for you,  so you’ll get your registration in today and take advantage of the great savings.

10.  Revamped Youth Events.  We’re including activities and events for our young magicians, as well as the most exciting way to showcase their talents for all of our members.

9.  More Cabaret Shows.  There’s a lot to be said about seeing a great performer in an intimate theatre. You’ll see a variety of cabaret shows – more than we’ve ever produced before – and with some unique twists.

8.  New and Improved Dealers Room.  The Dealers Room showcase is getting a makeover too… It will be an exciting hub and gathering place for registrants with new fun things to experience and see  Some terrific dealers are already on board, with more on the way.  You’ll want to see what they have to offer!

7.  Themed Events and Parties.  From our opening night event to closing night party we’re spending more money and effort on creating a fun environment with food and decor!

6.  Prestigious Contests.  Many contestants have agreed that the I.B.M. Gold Cups Contest and I.B.M. Gold Medal Contest are the best run contests in magic.  It just got better!

5.  Dinner and 4th Show Included.  For the first time, for one price, EVERYONE gets dinner and a show!  A specially-developed stage show experience in a uniquely-themed environment make for an unforgettable evening of great food, incredible magic and memories

4.  Better Close-up Conditions.  The Close-up rooms for Contests and for the booked talent are better than ever.  More intimate.  Better set-up.  The best close-up rooms ever!

3.  Special Interest Group Sessions.  You can choose your specific area of interest and attend a variety of informative lectures and workshops based on what YOU want to learn.  And that’s in addition to all of the General Sessions and Lectures!

2.  Talent Line-up.  We’re still holding this close to the chest…but we guarantee you’ll see a fantastic line-up of some amazing magic stars and some of the most exciting acts you’ve never seen at a magic convention before.  Plus, each of the stage shows will be packaged in an exciting new way….More on that later.

1.  Dallas Sheraton is Ideal.  The room rate of $99 is the lowest it has been in years.  All of the convention activities are centrally located and just an elevator ride from your room.  And the beautiful historic Majestic Theatre is just a short walk through the park (literally) from the hotel.

www.facebook.com/ibmconvention for all the latest details!

You have just a couple of days left to take advantage of the biggest savings for the most exciting convention of the New Year!

GO TO https://www.magician.org/portal/ibmconvention_signup! TO REGISTER NOW!

For 2010, I decided to not only identify the strongest products (for this, I’ll rely on my latest gift guide for magicians). But wanted to look for and call out the products that I felt brought the most innovation to our art. And I wanted the products to be useful for magicians in a good number of performance situations.

With this in mind, here are, in my opinion, the best and most innovative products of 2010:

A Chat With Street Magician Dynamo
by Ally Millar 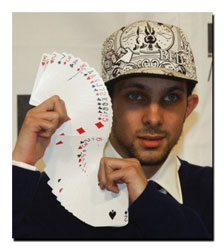 LONDON – I saw remarkable street magician Dynamo perform at the launch of the Panasonic TA1 handheld camcorder and it was a revelation; a welcome relief after withstanding so many formulaic press shows where some shockjock works a crowd; there but for the free booze.

A wizard with a deck of cards, you may have seen Dynamo perform on his recent webseries DynamoTV or on Soccer AM where his tricks are the show’s most watched videos on their YouTube channel. 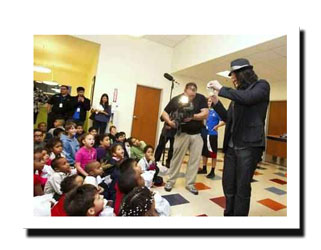 Mindfreak magician Criss Angel continued his holiday gift-giving generosity yesterday handing out dozens of $100 bills when he launched his Magic Jam initiative at one of our local Boys & Girls Clubs.

Criss started locally with his nationwide gift of $1 million worth of his Magic Kits to the Make-A-Wish and Boys & Girls Club charities, as VegasDeLuxe.com reported Monday.

While at the club yesterday, he decided to do some unexpected close-up magic tricks for the spellbound youngsters. Those who guessed random numbers won a $100 bill from Criss. 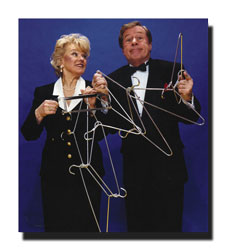 “The Amazing World of Magic” Starring Richard Gustafson and Troupe comes to the Broadway Theatre of Pitman, 43 S. Broadway, Pitman, from Sunday, Dec. 26 through Wednesday, Dec. 29. Show times are: Sunday at noon and 4 p.m. and Monday, Tuesday and Wednesday at 2 and 7:30 p.m. Tickets start at $12 and can be purchased at www.thebroadwaytheatre.org.

Science and magic actually have a lot in common.

And Richard Gustafson, a magician who holds a Ph.D. in chemistry, is definitely proof of that.

Bazaar de Magia in Buenos Aires is organizing a convention this coming September 2011.

They have asked me to assist them here in the United States with registrations.

Magic contest winner will receive a contract to perform with Gustavo Lorgia, $1800 US plus flight and expenses, hotel costs, etc.

The cost to attend this convention is only $195 per person for registration and the price will remain at this until February 28, 2011.  I can make arrangements for you to pay in 3 equal payments or 6 equal payments through a credit card.

You can either visit the website for further details or send me an email and I’ll get you whatever information you require.  THANK YOU

For those who haven’t heard; Paul Sponaugle’s family suffered a devastating accident on Christmas Eve.  His niece and her family were traveling to visit his sister when the vehicle they were traveling in had a 1 car accident and flipped over several times.  Both his niece and her husband, who was driving, were thrown from the car, the two girls were strapped in and remained in the vehicle in the back seat.   The girls suffered bumps and bruises but should be fine, the niece is in critical condition at the hospital and is facing numerous surgeries; the husband was killed on impact.

Please put them in your thoughts and prayers as they go through this difficult time.  You can read more about it at the below link to the story

For those who wish and are able to help, a fund has been set up to help with Trina’s current and future medical expenses, and for final planning for Paul. Any amount will help.