Greetings, it is an absolutely perfect and beautiful day in sunny south Florida today. The sun is shining brightly, the breeze is blowing softly and the view from my office window is perfect for staring out and daydreaming. 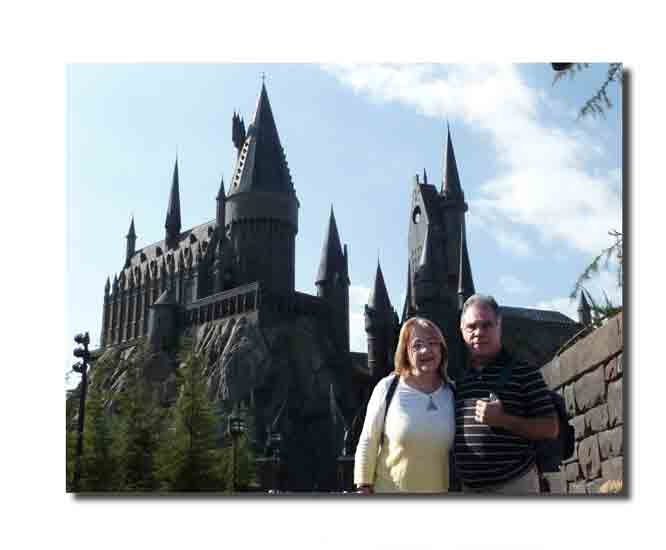 First, I’d like to thank you for all your phone calls, cards, emails and letters congratulating us on our 38th wedding anniversary; your wishes helped make the day very special. Jay and I left Miami at sunrise and dropped our son Orlando off at the airport as he was due to fly to California for Marine Corps work. We then headed north to Orlando. The day was spent at Downtown Disney, the main gate fleamarket, Old Towne and other area attractions before meeting up with Godparents Clem and Jean Kinnicutt for a lovely afternoon and anniversary dinner with them. A perfect ending to a perfect day.

Friday we headed out to Universal Studios and spent the day making a dream come true….we spent the day at Hogwarts! Yes, we did see the choosing of a wizard by a wand at Olivanders, we went through the school on the magnificent ride, we visited all the shops and saw the shows and left there convinced that Harry, Hermione and Ron were just out of our sight around one of the corners. What a phenomenal park Universal has created!

Could there be more? You bet! Saturday was a full day of fun, magic, and camaraderie at the FAME Orlando Auction; an event we look forward to every year in February. Visiting with old friends, picking up some bargains and selling some magic; everyone who attended left a little richer whether with new goodies to play with or with more green in their pockets. Highly recommend you put this state wide auction on your list of things to do in February.

“There is a destiny that makes us brothers: none goes his way alone,
All that we send into the lives of others comes back into our own.”

Open meeting for magicians in the area, comprised of members of Magic City Conjurers, S.A.M. Assembly 280 and I.B.M. Ring 45. Everyone is welcome to attend and as we often say….come one, come all; the more the merrier!

It is with great appreciation that I write to thank all of you for being such loyal friends of VegasInsideTips.com. As some of you may know, Steve Dacri lost his fight with colon cancer on Friday, February 11th. And so this marks the finale of Steve’s wonderful web publication. We would like to invite you to join us at his memorial service to be held at the Davis Funeral Home on Eastern Avenue this Sunday, February 20th at 5:00 pm.

Again, thank you so much for your treasured readership.

Coming Up in the March 2011 M-U-M
By Michael Close, Editor

Our March cover subject is Eric Jones, one of the rising stars in close-up magic. Eric has maintained a high profile lately, with performances and lectures around the world and the release of a three-DVD set titled An Extension of Me. As you’ll find out in the article by Bruce Kalver, Eric’s life has had some ups and downs, which have forced him to be both resourceful and creative. Immediately following the cover story, you’ll find one of Eric’s favorite routines, Impossible Coins Across, from his lecture notes Fingertips Part 1.

Also in the March M-U-M:
In his column A Magician Prepares, Dennis Loomis discusses how he incorporates balloon modeling into his kid’s show act. Dennis offers some very practical advice that will be of value to anyone who wants to “up-sell” his or her show.

Part two of Chris Wasshuber’s series on making your own gaffed cards covers design elements, offering some useful online templates that will make your job easier.

In Illusions of Grandeur, David Seebach talks about the Owens Magic Supreme illusion, Tea for an Oriental Potentate. It’s an illusion that is almost never performed, and you’ll find out why.

Roger Blakiston’s Unlimited Possibilities column is back this month. Roger offers magicians of all interests some sound advice on the secrets to personal growth.

Christian Painter tips one of his favorite routines: a practical and unusual handling of Matsuda’s WOW trick. With this routine Christian has accomplished three important things: he has figured out a natural way to introduce the prop; he has devised a way to switch out the gaff; and he has turned a magic trick into a demonstration of psychological control.

Tom Ewing writes about The Great Raymond (with a beautiful accompanying poster) in the Nielsen Gallery.

Bill Duncan and the staff of Informed Opinion give you the lowdown (nine pages worth) on the recent products released to the magic marketplace. Bruce Kalver keeps you up to date on the technical side of things with his Tech Tricks column.

All this and more is available to members of The Society of American Magicians in the March 2011 M-U-M. Membership information is available at www.magicsam.com.

BEWARE THE IDES OF MARCH

Good advice. Take advantage of the timing and save $ 40.00 per person- S A M Convention rates go up MARCH 7- Now is the time to register for the great Pittsburgh historic convention at the Wyndham Grand -July 13-16. Camaraderie, Fantastic Gala shows, award winning lecturers and close up artists. People’s Choice show, Both the famous Society of American Magicians and North American Championship contests. Youth events plus dealers from around the world Don’t wait until March. Here is the fastest way to do it.

S.A.M. NATIONAL COUNCIL MEETING
Members of The Society of American Magicians are invited to attend the Spring National Council Meeting in Orlando, Florida on March 12 and an “Evening of Magic and Dinner” on March 11. RSVP a must for the show, as tickets will not be available at the door. More information can be found at www.magicsam.com. 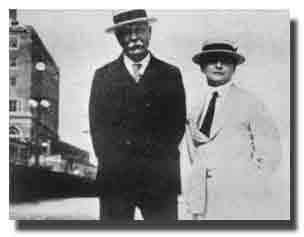 The greatest trick the devil ever pulled was convincing the world he didn’t exist. That’s nothing compared to the works of expert magician Harry Houdini, however, and it’s certainly nothing that Sherlock Holmes couldn’t puzzle out on his own.

We’ll get the chance to see Houdini and Holmes creator Arthur Conan Doyle put their heads together in “Voices From the Dead,” an original screenplay written by “Changeling” and “Thor” writer J. Michael Straczynski.

Review: A Look at a Truly Greatest Magician
Howard Thurston surpassed Harry Houdini
on the stage, but lost to him in long run
by MARY FOSTER Associated Press 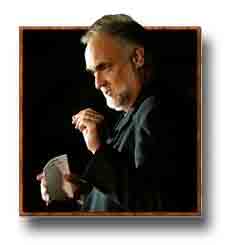 “The Last Greatest Magician in the World: Howard Thurston versus Houdini & the Battles of the American Wizards” (Tarcher/Penguin, $26.95), by Jim Steinmeyer: Jim Steinmeyer will make you long for the days when magicians competed to build bigger and better illusions and dazzled audiences with floating princesses, disappearing assistants and rabbits pulled from hats. 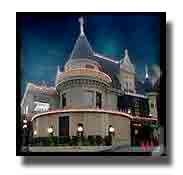 When I heard that the Huffington Post had recently published a story about the Magic Castle I quickly found and read it. It’s a well-written story by a talented writer, but I can’t help to feel that the writer was stretching her points at the expense of our art.

“There are running clubs, knitting clubs, and since 1963, a private club in LA where those who hide birds in their pants can gather and impress fellow bird pantsers,” states the writer, Laurenne Sala, in the Huffington Post story. (click here for story: http://tinyurl.com/5uqbzth ) 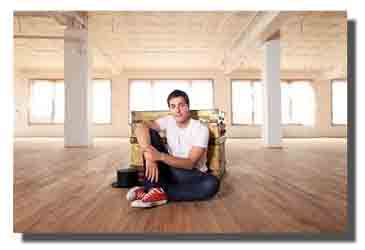 CANADA – By the young age of 11, Sherwood Park native Sheldon Casavant knew magic was going to be more than a hobby. With interest in magic at a very young age, Casavant honed his skills at the McBride Magic and Mystery School in Las Vegas and later graduated from the prestigious Chavez Studio of Magic in La Verne, California.

Now in his mid-20s, Casavant has turned his love for magic and its intricacies into a full-time budding career. Described as one of Canada’s highly sought after performers, Casavant will bring his magical act to Leduc at the MacLab Centre for the Performing Arts on Feb. 20.

Keep a few tricks up your sleeve:
Magic is a disappearing art
by Bob Grafe | Seguin Gazette Enterprise 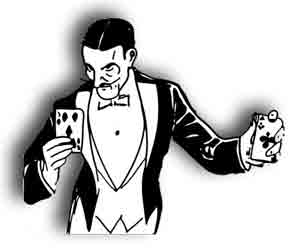 Seguin, TX – Grandchildren get that same look of puzzlement and amazement on their faces when either David Copperfield or their grandfather makes things disappear and then reappear, floats things in the air that aren’t supposed to float, and even when they push a pencil through a $20 bill right before their eyes … only to discover that there is no hole left.

I learned recently during a birthday party magic show for two of my grandchildren (and a group of their 6- and 8-year-old friends) that if you want to endear your grandchildren to you, learn well a few magic tricks and then one-on-one teach your grandchildren how to perform them. Then, be sure to share with them how to keep the “magic” a secret. 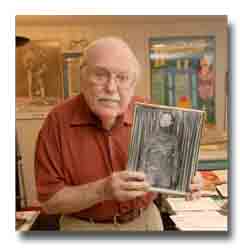 Sidney Radner with an item from his famed Houdini collection

“Chumlee” was unimpressed, but the expert sided with the guy with the Holyoke connection.

Chumlee is the nickname of a character on the History Channel televison series “Pawn Stars.” On the show, collectors, stuff-unloaders and others bring items into the Gold & Silver Pawn Shop, a 24-hour family business in Las Vegas, and barter with the proprietors to try to get the highest prices for their goods. On a recent episode, a man brought in handcuffs and leg shackles he said belonged to Harry Houdini (1874-1926), the magician, escape artist and ground-breaking showman. 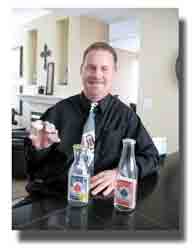 SALINAS, CA – “Now you see it; now you don’t!” That expression could well serve as the motto for Dale Mulhern and how he entertains people. The longtime magician has parlayed what was a passion of his youth into a part-time job as he dazzles astounded audiences with his legerdemain.

A Michigan native, Mulhern recalls seeing his first magic trick when he was about 7 years old. It was the “Cups and Balls” trick performed by his uncle. Not only did that trick set him on the path to mastering magic, but he now performs it in his own shows. 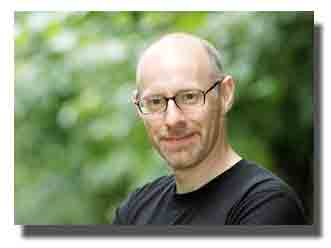 He learned his trade as a teenage magician working the crowds in Covent Garden, learning to deliver rapid-fire entertainment before the toughest audiences. Now the maverick academic, popular psychologist and author Richard Wiseman is to be the first guest curator at this year’s Edinburgh’s International Science Festival.

He’s planning 11 sessions that will blend science and entertainment, ranging from the psychology of dogs and how to spot a psychopath, to the science behind Edinburgh’s high-tech fireworks displays. 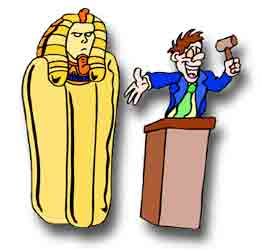 Would you please give our auction a plug on your mailing? Above is the link for the basic info……..

Do check out the items we have already for the stage auction. This is the 30th annual auction we have had, and we do know how to put on a day-long show/sale. For only ten bucks admission, you can enjoy great auctioneers and see a lot of magic, not to mention buying the items…… We will have thousands of items for sale on the stage and in the silent auction. 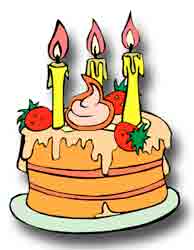