Greetings, hoping everyone had as wonderful a week last week as we did, although it was very busy.

Several shows for me, a bit of travel for Jay who had to visit clients in the north end of his territory, taking Orlando to have his back worked on for realignment before participating in the Spartan Race this past Saturday, going to the Marlins game on Sunday….wow, I get 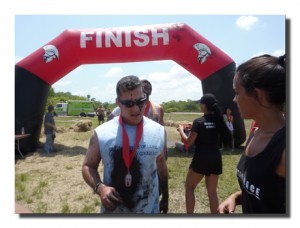 tired all over again just writing about it.

Friday evening we were treated to tickets to attend Wicked as an Easter gift by Orlando. What a show! Jay and I enjoyed the show tremendously. There is a great deal of meaning behind the show, the dynamics between the two witches and the good vs evil in the world. Highly recommend you attend if you are ever somewhere that it is playing.

This week is shaping up to be just as busy as last week was; a tough one for sure because I am sunburned like you can’t believe from sitting in the sun all day Saturday as Orlando ran the Spartan race. The Spartan Race is more than just a marathon, it is a test of strength, endurance and mental ability such as Spartans would have faced. Very proud our son finished it, something some were unable to do.

“We have learned to fly like birds, swim like fish,
but we have not learned the simple art of living together as brothers”

A very special lecture by the one and only JAY SANKEY
WWW.MAGICINMIAMI.COM 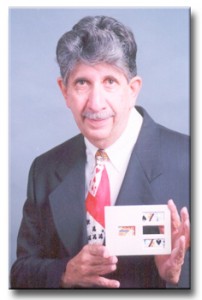 This Night of Magic Will Be a New Lecture Called “NOW THAT WAS EASY!”

A collection of tricks that Mike has invented or performed in his act and secrets that he had learned in the past 50+ years in magic.

The emphasis will be on self working tricks that everyone in the club can do.  The lecture will show how to make small tricks play BIG, how to entertain your audience; and give twists and tips on tricks you already know.  This is a general magic lecture and will cover a wide range of magic tricks and principles. 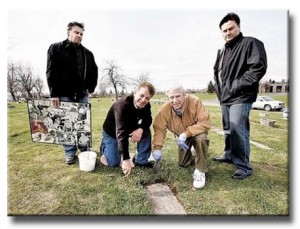 Once a year, as close to the April Fool’s eve anniversary of Eddie Fechter’s death as they can get, four professional magicians from two generations come together in Mount Calvary Cemetery.

They meet as they did last week, to scrape away dirt and grass that has crowded Fechter’s flat gravestone and conjure memories of an old friend who taught the powerful magic of humor, charm and disappearing cards at his bygone Forks Hotel. 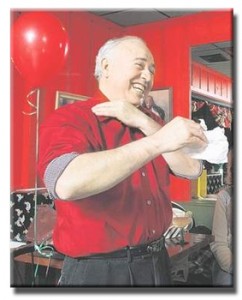 “To say hello, to see your customers, is what gives you life,”
says Israel Campos at the Cancun Inn.

NEW HAMPTON, NY — The 6-year-old boy is peeking through a hole in the mud hut. When it rains, water washes away the mud in spots, and then you have to patch the holes. But his father hasn’t done this yet, so there are holes here and there in the walls.

The boy is looking through one of these holes because his father didn’t come home last night.

“Go and get your father because he’s at the cantina drinking,” the boy’s mother had told his sister, Elva. 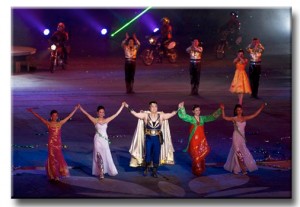 North Korean magician Ri Thai Gum, center, accepts applause
from the audience at the end of his performance at the
Pyongyang, North Korea Monday, April 18, 2011. North Korea
has unveiled a magic show, starring Ri Thai Gum and designed
by a man dubbed the “David Copperfield of North Korea” which
will run for seven performances through early May.
(AP Photo/David Guttenfelder)

PYONGYANG, North Korea April 18, 2011 (AP) – Amid a burst of fireworks and a haze of smoke, a burly showman in a white sequined suit and gold lame cape appears with a flourish. Over the next 45 minutes, he appears to make a Pyongyang bus levitate and wriggles free from a box sent crashing to the stage through a ring of fire.

This is magic North Korean-style performed in a show touted as the country’s biggest ever and mounted in a city where good, old-fashioned illusion, a dancing bear and a dose of slapstick comedy can still command the biggest crowds of the year. 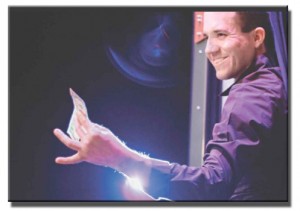 Bill Blagg will appear Sunday, May 22
at The Palace Theatre in Albany.
Go to palacealbany.com or billblagg.com for more information.
(Courtesy BillBlagg.com)

It’s funny how we’re all so captivated by magic. It is, essentially, a high-tier prank show, in which an artist of deception fools the audience. When you go to see a magician, you’re misled, tricked and hustled.

Why is this desirable? Maybe it has something to do with the ways in which magicians perform little miracles, as we willingly suspend our belief for just a moment. It’s an escape and an affirmation that maybe miracles do happen

He was green before it was cool
Steve Trash continues to entertain, educate
By Sarah Carlson | Staff Writer 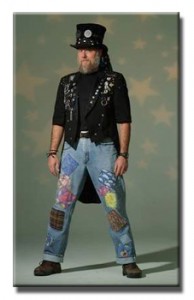 Working with light bulbs was Marvyn Roy’s gimmick as Mr. Electric, and he encouraged the young magician to find what made him unique in the marketplace.

Steve was a street performer, or “busker,” in New York City, having left the Shoals the day after graduating with a theater degree from the University of North Alabama in the mid-1980s. His magical slight-of-hand tricks amused onlookers. 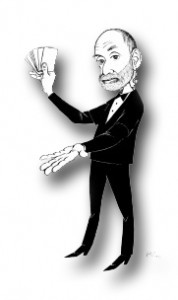 Philadelphia, PA – Most days you can find West Mt. Airy resident Richard Horn in his lab at Thomas Jefferson University, scrutinizing ion channels, which are proteins that help ions travel across cell membranes. But on Thursday mornings, he slips on a green volunteer vest, takes the elevator to the cardiology unit on the 5th floor and makes cards come alive.

“Hi, my name is Richard,” he said, calm and rehearsed. “Aside from being a Jefferson volunteer, I’m also a card-carrying magician.”

Horn, a professor of physiology, has a tumultuous history with cards that stretches into the 70s and takes him back to his touring days. While taking a break from college to play keyboard for Australian pop star Helen Reddy, Horn found himself restless in casino after casino. So he picked up card counting. It was simple to learn how, he says, the Las Vegas libraries are full of gambling books. Horn admits he was obsessed. He took his deck of cards everywhere and practiced every minute he could. His hobby ended quickly, though, when a couple of casino thugs advised him to stay far away. 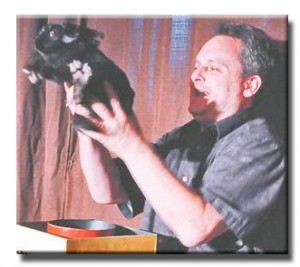 Magician Bruce Gauthier pulls a rabbit out of a box during a magic show
hosted by Nevada County Magicians Guild in April at historic North Star House.
File photo for The Union by John Hart

Fresh off its show at the North Star Mine House, the Nevada County Magician’s Guild is busy preparing for an event scheduled the weekend before Halloween.

The guild was founded more than 20 years ago by local Bruce Gauthier, who has been a performing magician since he was 14. For a time, he performed three nights a week at a local Grass Valley restaurant.

Mark DeSouza will present his famed “History of Magic” lecture to “early birds” arriving in Pittsburgh (Tuesday, July 12); the night before The Society of American Magicians convention opening date.

This is not a conventional lecture but a special power point and a live standup performance by Marc Desouza, demonstrating ten historical effects dating from early Egyptian Conjurors to today’s magicians. This will take place in the evening, following  the traditional night before “Dealer Room” opening. The convention at the  Windham Grand Hotel begins July 13-16 .   Marc’s regular “Masterworks” lecture will be added to others featuring  Jay Sterling , Ed Ellis and two  by  Joshua Jay, during the week. See  www.magicsam/com for convention details.

Magic in Cali, Colombia has a name and that is AMACA (Asociacion de Magos de Cali – Cali Magicians Association).