Greetings, this past Friday marked my 34th year as a professional magician; the magic carpet ride has been quite an adventure and it has been all the more special for the privilege of having shared the ride with you, my friends and readers. 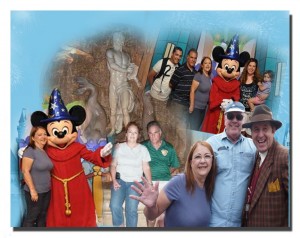 A friend of our sons from the time of elementary school whisked us off to celebrate the magic anniversary at the most magical place on earth, Disney World.  It was a very short weekend as we were only able to get away for a day but it was a very special trip as we were able to spend time with my Godparents, Clem and Jean and also had an opportunity to spend some time with our friend Terry Ward, the fantastic street magician at Hollywood Studios, always a pleasure to see him perform.  Reality set back in yesterday afternoon when we returned home, can’t get away too often or too long due to the rocky health issues with both our moms.

Now to finish the last minute work on the presentation for next week’s International Storytelling Festival at which I will be telling.   The event will be Saturday, April 27 from 10:00-4:00 at the Main Library, Downtown Miami.  Any of you who will be in the area please do stop by and say hello, it is a community event which is free to the public and which features all types of booths and interesting cultural events.

IN THIS ISSUE
AROUND FLORIDA
Magic-Fest 2013
SOCIETY OF AMERICAN MAGICIANS
No Losers in Washington D.C.
SAM on Facebook
JEFF MCBRIDE
Stop Thief!
MAGICIANS LIFE
Sebastian Walton
Now You See Me
Ricky Jay
CONVENTIONS AND EVENTS ELSEWHERE
BIRTHDAYS FOR THE WEEK 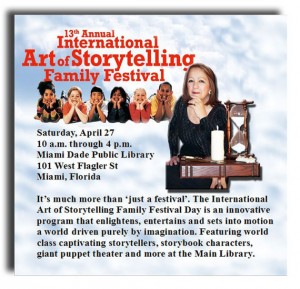 Once upon a Saturday, on April 27, 2013, tales will be told….fun will be had….and you can be a part of the marvelous FREE event…..and our day will end happily for all. 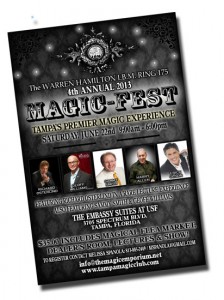 This year’s event will feature mentalist Richard Osterlind in a rare Florida appearance. Richard will be giving a fantastic lecture and he will perform in our Parlor Show as well. Geoff Williams and Samuel Patrick Smith will also be lecturing and performing in what is sure to be an unbelievable full day of magic!

Our MC for the convention will be Erick Olson and Harry Allen (from Daytona Magic) will be doing his unique and always fun-filled lecture.

Please feel free to make copies of the attached convention flyer and show it your magic club and magic friends. Convention Registration is only $35 for a FULL Day of Magic. We’re expecting a sold-out convention this year and to avoid a delay at the registration desk, call Melissa Spanola, 813-885-2449 (we take credit cards) to make your reservation in advance.

Convention Registration begins at 8:30AM with the Dealers/Flea Market Room doors opening at 9:00AM. The first lecture starts at 9:30AM.  For a full schedule, go to our website – “Convention” link for additional information: http://tampamagicclub.com/

The convention will once again be held at the beautiful Embassy Suites hotel, 3705 Spectrum Blvd., Tampa, FL.  If you need a room, call Melissa Spanola as she has a special rate of $129 per night. This rate is not available through the hotel registration number.

There will be a large Dealers Room, packed with Great Dealers from all over Florida. We will again have Flea Market tables in the Dealers Room that will be loaded with lots of outstanding magical treasurers. There will surely be something for everyone.  If you would like to have a Flea Market table, while they last, call Ken Spanola, 813-885-2449. A flea market table is only $10 for paid convention registrants.

So as soon as you finish reading this:

The Warren Hamilton I.B.M. Ring 175 thanks you for your help and we look forward to seeing you at MagicFest on June 22nd.

PS. Richard Osterlind will be holding an extra fee event on Sunday, June 23rd at The Magic Emporium. The 4 hour Workshop will feature some of Richard’s most outstanding items and has a limited number of attendees. The fee for this workshop is only $50. Call ASAP to make your reservations at The Magic Emporium – 813-265-WAND.

NO LOSERS IN WASHINGTON  – S.A.M CONVENTION

Washington, D.C. has its share of political winners and losers, but there are NO LOSERS  at the Society of American Magicians Convention!  Over the years the winners and contestants of the Society of American Magicians Convention Contests have received acclaim, publicity and great bookings. Many well known magicians have gone on to become magic stars. As always, two entertaining contests are scheduled for Washington DC  (July 3-4-5-6).  Along with lectures, gala shows, dealers and other exciting events, the contests showcase and provide a new look at the magic of the future.  Register today at www.magicsam.com    And if you’d like to participate; there are still a few openings for performers wishing to share their talents. There are NO LOSERS.  If you are interested in appearing in the Close-up or the Stage contests, send an email to chairman Paul Critelli at Magicpaul@aol.Com  or send a written request to Paul Critelli at 858 Iroquois SE  Grand Rapids, MI 49506.  The deadline is May 30. See you all in Arlington at the Marriott Hotel Crystal Gateway.

The Society of American Magicians is taking important steps to increase awareness and to provide more benefits to the magic community.  As part of this movement, on Friday APRIL 12   the Society will be launching a new  Facebook  Fan page open to ALL magicians.  This page will provide important announcements, breaking news, and will relay product information to the users.  To see this page go to

hoping to get 2400 followers in 24 hours on the new Facebook  Page. If this goal is reached 24 corporate friends of the S.A.M have agreed to offer some amazing deals and discounts. One of the deals is offering  $25.00 off to NEW registrants to the Annual Convention in Washington DC (July 3-4-5-6) .  The offer is only good for the next 24 hours IF AND ONLY IF they receive 2,400 “Likes” in the next 24 hours.  See the deals on the page.

Don’t worry about people stealing your ideas. If your ideas are any good,
you’ll have to ram them down people’s throats. — Howard Aiken

This may be the biggest story in the world of magic today!

The BBC picked up on my recent situation with the recent “copy act” and how I handled it gracefully as “a magic teacher.” They picked up on this problem, currently rampant in our magic world – acts, inventions and other intellectual property are being ripped off left and right.

There’s also a ‘webified’ text of the radio story that ran on PRI, but it’s much better if you click the ‘play’ button to listen to the audio of the radio show:

Look at or listen to both of these stories! They are ground-breaking stories on “magic theft,” and intellectual property rights, getting notice by major mainstream media.  Many thanks to our new friend, Arun Rath, the reporter who wrote both stories.

An original artist is unable to copy.
So he has only to copy in order to be original?
—Jean Cocteau

Magic back in vogue as
teenagers are up to new tricks 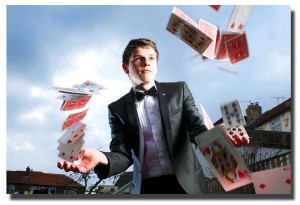 Call it the Dynamo effect. A new generation of teenagers is taking up magic, and it appears to have little to do with Debbie McGee and more to do with Dynamo, the TV illusionist whose street stunts, such as walking on the Thames, have prompted a surge of enthusiasm for the dark arts of card and coin tricks.

The Magic Circle has reported record membership of its Young Magicians Club as well as unprecedented interest in its biennial Young Magician of the Year contest this week.

NOW YOU SEE ME

‘Now You See Me’: Morgan Freeman Invites You to Look Closer
by Angie Han 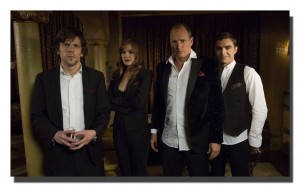 This year is turning out to be a big one for magicians. Last month, Steve Carell and Jim Carrey duked it out as battling Vegas showmen in The Incredible Burt Wonderstone, and next month our favorite non-Alliance illusionist Gob Bluth returns for the fourth season of Arrested Development. Then, just a few days after that, Louis Leterrier‘s Now You See Me will demonstrate what happens when magicians apply their special skills to criminal ends.

Ricky Jay:
Behind the mysteries of a
master magician 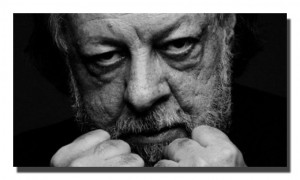 Once the youngest magician to ever appear on TV,
by now Ricky Jay may simply be the best.

The biggest disappearing act Ricky Jay ever pulled was himself.

Yes, there are still some facts you can pull out of a hat. He was born in 1948 in Brooklyn, and is perhaps the world’s best sleight-of-hand artist, particularly with cards. He has made movies, written books and played Broadway. A new documentary, “Deceptive Practice: The Mysteries and Mentors of Ricky Jay,” opening Friday in New York, celebrates his imagination and his influences. 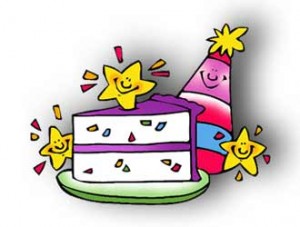