Greetings, it seems as though New Years was only yesterday and yet here we are almost at the end of January…tempus fugit or time flies is a very true statement.

Jay comes back from his trip to New Orleans today and I can honestly tell you that these few days he was away from home felt like a lifetime.  Glad he will be coming home this afternoon and that we will have a couple of days together before I head out to Jacksonville for a very special workshop and lecture by the one and only Kenton Knepper.  Very excitedly looking forward to that.

Speaking about time flying, in just 2 weeks our baby grandson will be turning 5 years old.  He is growing up so quickly and has turned into such a fine young boy who is doing very well in pre-kinder and is a great big brother to Jianah.  Wish we could keep them small for much longer but there is no stopping time.

“You can find magic wherever you look.
Sit back and relax, all you need is a book”

Friday of this week we celebrate the life of St. John Bosco also known as Don Bosco, the Patron Saint of Magicians.  The members of Magic City Conjurers and the magicians in Miami would like to wish magicians everywhere a happy and blessed St. John Bosco day.  May your magic continue to bring happiness and wonderment to others.

Taylor Martin is pleased to announce another great act to the lineup of Indy Magic Monthly @ Theatre On The Square. Famed magician Shayna Reed is now part of this amazing cast. She joins Andrew Martin of Toledo and Sir Pat-Trick of Cincinnati. Here’s her biography. 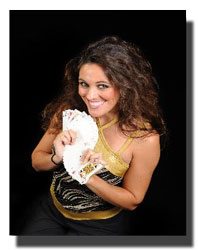 Shayna Reed has amazed audiences throughout the world.  She started performing magic at the age of three.  Since then she has been featured in numerous newspaper articles and magazines.  Shayna and her two sisters, Jessica and Mandy, were featured on the front cover of the International Brotherhood of Magicians monthly magazine “The Linking Ring”.  Shayna and her sisters have performed as the headlining act in France.  She has also been featured in a Japanese documentary that aired in Japan for several years, as well as many television appearances here in the United States.  Her most prestigious award was winning the World Championship of magic in 2007, which was held in Las Vegas, Nevada.  Shayna’s high energy and charismatic onstage presence makes her act one not to be missed. 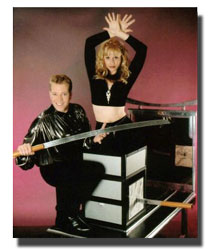 More than a decade ago, lines stretched down Edmond Street as families waited with excitement for a show that had become a tradition in the area — The Superstars of Magic and Comedy.

Selling out the Missouri Theater for five consecutive years, the show, a creation by St. Joseph native and internationally renowned magician David Sandy, was big. 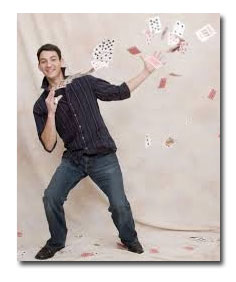 COURT HOUSE – On Monday, Jan. 27 at 7 p.m., moviegoers will be given a rare opportunity to see Chad Juros perform and speak about magic. Juros, an acclaimed magician from New Jersey, will be the featured guest speaker at the Middle Township Performing Arts Center “Monday Night at the Movies” series following the showing of the documentary “Deceptive Practice: The Mysteries and Mentors of Ricky Jay”.

Joel Meyers will perform at SCCC, Jan. 30
by Katie Sobko 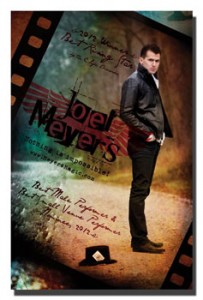 “… the show is so much more than just a magic show so everyone will enjoy it.”  — Magician/Comedian Joel Meyers

Meyers will be at Sussex County Community College to perform his brand of magic on Thursday, Jan. 30. 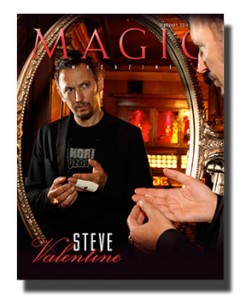 If you have not tried out our MAGIC Plus, this is a great month to do so.

There’s a tutorial video of V.I.P. Card Through Handkerchief from Steve Valentine, as well as a clip of Dick Turpin — one of Steve’s mentors — performing Cards to Pocket. And for even more Mr. Valentine (in February, no less), we have posted his December 2007 interview from this magazine.

There’s also a video sampler of BeBop Bamboozled, the Super Bowl XXIII Halftime Show featuring magic in 3-D, and the entire first episode of a new Irish magic series. And of course, Jason England walks you through the latest card tutorial.

It’s all available on the MAGIC Plus page at www.MAGICmagazine.com. Your copy of the February issue is your key. Enjoy!

Thanks for your continuing support…

P.S. MAGIC Magazine is also available for the iPad. The cost is only $3.99 per issue, and it arrives within a few minutes. Best of all, you only buy it once, then you own it forever and can enjoy it wherever you want.

Just a quick reminder for those planning to go to the 2014 Convention that have not yet registered for the event. The registration fee is $495. Don’t hesitate – REGISTER TODAY!

The 2014 Convention will be held in St. Louis, Missouri from July 1 through July 5. The host hotel is the Renaissance St. Louis Grand Hotel located at 800 Washington Avenue. Room rates are $115/night single or double plus applicable taxes. This rate is applicable three days prior and post-convention (based on availability) if you plan to stay and make it a vacation.

You can reserve your room by

Be sure to tell them you are with the I.B.M./S.A.M. Combined Convention to get the convention rate.

Thinking about competing at the convention?

You can enter one, two or all three contests! The I.B.M. and S.A.M. will be holding their annual stage and close-up contests with cash awards totaling over $30,000. If you are a member of both organizations, your act will be considered for the awards being given by both organizations. In addition, the Combined Convention will be the host for the North American FISM championships.

Entry slots available to North America for the 2015 FISM World Championships of Magic in Rimini, Italy will be awarded to the TOP North American residents with a score of 80 or better. This is the ONLY way for a North American magician to compete at the 2015 FISM. For moreinformation on all three contests and to register for the contests, go to the Combined Convention website –   http://ibmsam.com/contests-temp/

Following on the successful presentation of the Lance Burton Teen Seminar in Phoenix, the Combined Convention will present the Lance Burton Young Magicians Seminar on June 29-30. This event is being sponsored by the I.B.M. and S.Y.M. and is open to all young magicians between the ages of 7-19. We are planning two different tracts – one for magicians 7-12 and the other for the 13-19 year olds. This is the MUST ATTEND event for young magicians!

Along with the outstanding competitions taking place in St. Louis, there will be lectures and evening shows presented by top magicians from around the world. Enjoy performances and lectures by our team of Family Entertainers, The Fat Brothers, The Magic of Germany AND The Magic of Korea. These events include top artists such as Danny Orleans, Dani D’Ortiz, Miguel Angel Gea, Christian Engblom, Timo Marc, Gaston, Lukas, Yu Ho-Jin, Henry Evans, Shawn Farquhar and Xavier Mortimer to name a few. (Note: Acts are subject to change without notice.)

Interested in being a Dealer at the Combined Convention – check with our Dealer Chairman, Obie O’Brien to see if there any spaces open. Send an email to dealers@ibmsam.com

As you can see, the 2014 Combined Convention will be an EPIC event!

Meet Us in St. Louis where IT’S ALL ABOUT THE MAGIC! 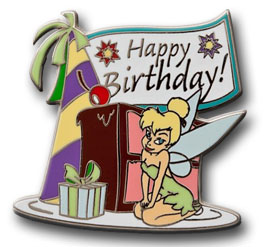