Greetings, I attempted to start working on this issue of Have You Heard? yesterday but had a very difficult time doing so.   The words just weren’t flowing the way I wanted them to, so, here it is Monday morning and I am now clicking away on the keys….hopefully to write a little more coherently than I would have yesterday with a writer’s block. 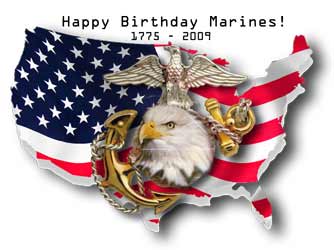 Before I start with the news and sharing info, please allow me to take this opportunity to wish a very HAPPY BIRTHDAY to all Devil Dogs out there.   Tomorrow is the 234th of the birth of the U.S. Marine Corps which was born 10 December 1775 at  Tun Tavern.   The mother of two US Marines, I cannot let such a day go by without thanking them and their brothers and sisters in arms for their sacrifices and wishing them a very HAPPY BIRTHDAY and Semper Fi!   As Ronald Reagan used to say “Some people spend an entire lifetime wondering if they made a difference in the world.  But, the Marines don’t have that problem.”

Also this week, the U.S. will be celebrating Veterans Day; a day set aside to pay homage and honor to those who have fought in defense of the United States.   We should never take our freedom for granted because “freedom isn’t free” and because America is “the land of the free because of the brave”, unfortunately all too many have paid the ultimate price.   Please take a moment to thank a veteran, to smile at them with gratitude realizing the sacrifice that they and their families have made and continue to make for us and our way of life.   From us to you, the veterans….thank you and your families for your service to our great nation.

This week has been a very busy one for us but also a very rewarding one that brought back some very fond memories of the high school days of our sons.   Friday evening Jay and I were invited to the Improv by fellow magician Adrian Fernandez and his girlfriend Patty; we had a terrific time and laughed so hard our sides still hurt.  So why do I mention this?  As we were leaving the Improv, the MDPD officer on duty turned out to be Officer Moreno, better known as Ivan to us — one of the high school band buddies that we hadn’t seen in quite some time — what a wonderful visit we had until way after midnight!   Saturday morning I had a job at the City of Doral and imagine my thrill and surprise when Jessiann showed up with her son to the event; another one of the school buddies except she goes way back to the elementary school days; she is now working on her doctorate in language arts (my how fast they grow!).   Saturday afternoon we went to the South Miami Art Festival and discovered that one of the busiest booths there was that of Marlon Pereira, a “boy” we’ve known since the boys were in middle school and who is now a very accomplished and sought after photographer…..it is indeed a small world full of wonders and surprises…..

Yes, our week has been a very happy and good one and so, until next time….keep a dream in the making for you create your tomorrows by what you dream today. 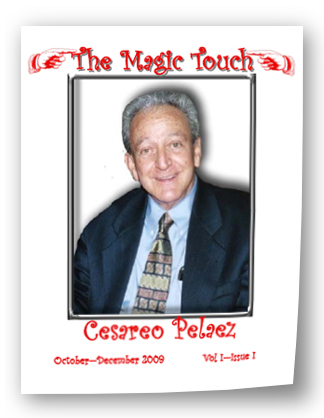 A special THANK YOU to each of you, the readers for your kind words with regards to the promised surprise that went out last week to your e-mails “Magic Touch”.   A long time dream that finally came to fruition with the help of a few friends who were willing to be contributors to it.   Since the e-mail went out, I’ve received several e-mails from friends who are also going to be contributing in the future, in addition to e-mails asking why we are going to go out quarterly and not monthly….remember, this is just a start and who knows where it will go in the future.

Please do send me any contributions you have to merlina17@aol.com so that we can include them in the next issue.   There’s no topic requirement and because we are not in actual print, we are not limited to the size or word count of your contribution.

I’d like to openly thank here those who were so instrumental in making the first issue a success, first, the man that it was dedicated to and who didn’t know about it until he received his copy…my very dear friend, Cesareo Pelaez and my family at Beverly of Le Grand David; secondly and in alphabetical order, Grandpa Chet Cox, Tom Craven, Simone Marron, Travis Marron, Angelo Stagnaro, and last but most certainly not least,  Neil Tobin.

Angelo Stagnaro is not only an accomplished magician, but also a published author of several great books, the latest of which his The Catechist’s Magic Kit.  He also publishes a newsletter called “Smoke and Mirrors” to which you may subscribe free of charge at

Our friend and fellow Floridian, Brian Staron, has headed out to West Point Academy where he will be entertaining the cadets on Friday, November 13th at 8:00 p.m. at Grant Hall.   Brian has committed to sending us photos of the event and these will naturally be shared in HYH (Have you heard?) just as soon as we receive them.  Thank you Brian for donating of yourself and your time to such a good cause!

The response to the post last week with regards to HO HO HO and the sale being run by Stelini Magic was incredible.   Many of you contacted me asking about how to reach John by phone or fax that I made contact with him and inquired about the best way to reach him to place an order and/or ask any questions….so straight from his e-mail response, here it is:

Maria,
Greetings. We do have a business phone and fax- Ph 734.844.3800 and Fax 734.844.3801, however, the best way to reach me directly is by cell – 734.775.7988. I understand the concerns of ordering without talking to an actual person and wondering if your CC info is safe. Next time you find yourself in Colon, please be sure to contact me. We plan to open full time in the spring of 2011. We also looking for partners and investors to expand beyond the shop and theater, if you know of someone, please forward my information.
Best regards,
John

Duane and Mary Laflin have moved and are now living in Pigeon Forge.  The Laflin silks and products are once again being handled by them directly so if you wish to purchase any of their products, just send an e-mail to them at laflinmagic@yahoo.com and they will respond very promptly.

Received the following information from John Pyka who announces the Houdini Awards recipients:

Hope you had a great Halloween, or as it is known in Nashville – Houdini Day! And speaking of Houdini, I hosted the Annual Houdini Tribute on Halloween, an event that included the official public announcement of the winners of the first ever 2009 Houdini Awards! Only one winner was on hand to accept – Deven Owens. The rest of the winners will recieve their awards via mail, with the exception of Dave Koenig and Drew Thomas. We have arranged a special presentation for them at the Daytona Magic Convention!

Voting was done by the members of the NMO Facebook group and MagicTalk.com. Votes were tallied by Athena Johnson and Robert Pierson.

Also this month is a new Trick of the Month Virtual Workshop focusing on the Scotch & Soda prop. The TOTM is a part of the pro forums, so drop by and contribute your favorite ideas for this very versitle prop!

The magic world has lost two great ones and is so much poorer for the loss.   May they rest in peace.