Greetings, mid November, a week away from Thanksgiving and the rush of the holidays to begin; a buzz of activity at the Ibáñez household with all the comings and goings of meetings, appointments, the customary shows, however, the week ended on a sad note when we lost a dear friend, Thelma Greenbaum. News of her passing is covered in depth elsewhere in the newsletter to do it justice.

It is a beautiful sunny, breezy day, in the upper 60s here in South Florida. The palm fronds are waving outside my office window and the butterflies and bees are fluttering over the red flowers which are plentiful outside the window I face out of. It is one of those days where one could stare out into nothingness except for the beauty of mother nature and daydream about the wonders of nature and blessings in our lives.

And so, until next time….keep a dream in the making for you create your tomorrows by what you dream today.

Billy Ray the Trailer Trash Magician is at it again. He recently performed at the 5th Annual Physicians Talent Show in Naples. FL. Follow the youtube link to view his comedy performance of Confessions of a Needle Swallower.”

Note from editor: If you haven’t seen Dr. Brooks and his performances of Billy Ray, you have missed what is perhaps one of the most comical shows I have ever seen. Given an opportunity to see his show, you shouldn’t hesitate, he is hilarious!

SMOKE AND MIRRORS — A CALL FOR ARTICLES

I’m currently preparing the November issue of Smoke & Mirrors. Please feel free to send me any announcements, articles or reviews you want to have posted. kismetmagic@hotmail.com

Gustavo Lorgia, starting November 12th, will be appearing in 13 television episodes called “KDABRA”. The magic concept for the show is a creation of Gustavo’s. It is part of Fox International and will air simultaneously all over the Americas. Continued success to him in all his endeavors, including his upcoming shows of November 26–December 5th, in Lima, Peru.

MALAYSIA TREATED TO MAGIC OF SONNY FONTANA AND ERNESTO PLANAS 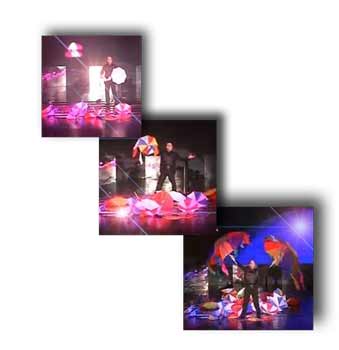 The man we can’t easily see since he is now the Invisible Man better known to us as Sonny Fontana, and Ernesto Planas are on an extended performance engagement in Malaysia where they are delighting the audiences nightly. Here is a link to where you can see a video of Ernesto performing his unbelievable parasol act. I’ve heard the term raining cats and dogs but in Ernesto’s case it’s raining parasols. You must see it to believe it and to understand what I am talking about. Ernesto, a Cuban born magician who has been living in Italy for over a decade, has an award winning act that deserves watching. Kudos and continued successes to him.

MAGIC TOUCH IS WELL RECEIVED – I AM HUMBLED BY  SUPPORT
What an incredible community we have in the magic one! Never in my wildest dreams would I have believed that my dream of that small publication called “The Magic Touch”, titled after the heading of a newspaper article published about my magic life by the Miami Herald years ago, would be received with such loving and supported comments and with the obvious open arms it has been.

Contributions are coming in from some great minds of magic and I am excited about what this next issue will bring.

Please note: The first issue went out to all subscribers of this weekly newsletter, Have you heard?, it was then translated in its entirety and emailed to the list of the subscribers of Escucho?, the Spanish version of the newsletter.

I have now created a new mailing list called “MagicTouch” and those on that list, which includes you if you are receiving this, will receive each issue of the publication when it comes out. You now have a choice if you only wish to receive one or the other …. Have you heard comes out every Monday with weekly updates of magic happenings (as always we welcome your news at merlina17@aol.com), The Magic Touch is scheduled to come out quarterly for now but that may change due to the overwhelming requests to be published more often.

Again, thank you for all your support.

PRO-MAGIC OFFERS DISCOUNT TO HAVE YOU HEARD? SUBSCRIBERS

Pro–Magic proprietor, Guy Bavli, contacted me letting me know that effective this issue and until the end of the year, subscribers of this newsletter, Have you Heard?, will receive an additional discount when they place an order on the website. The secret to receiving the discount is to use HYH as the code for discount.

FAB MAGIC LAUNCHES NEW WEBSITE WITH A 20% DISCOUNT
20% off list price! Plus there are a few items where you will receive 20% off the sale Price! A 45% savings on selected items!
Now announcingfree shipping Continental USA on orders over $20.00 (minimum order $10.00)
What a deal! Just type in this customer coupon code when checking out: newsitelaunch
Happy Shopping! Each and every week we will be running specials on all types of magic, books and DVD’s !
“Magic That is Simply FAB!”

The legendary John Calvert has just launched his new website. Photos, trailers and more in addition to a link to order his soon to be released new DVD.

Visit the site at : www.johncalvertmagic.com

Sunny in the hospital

The news in from Windy of Windy & Sunny letting us know that Sunny hospitalized. Here is what he sent:

Maryellen is in the hospital. She is the better half of the WINDY & SUNNY MAGIC SHOWS. She had an operationandfixed a problem but then found more trouble. Hopefully she will be home in about a week or so. We are waiting to hear what else may be wrong.We need all the prayers we can get.

Dick Laneau — an update
I had reported in the recent past about Dick Laneau and his health. I’ve just received an update from him as well as a call for help with the youth group. Here are the details of what he sent; please, if anyone is in that area and can help Dick with the SYM group, we would be very grateful.

“It’s great to receive your Have You Heard? emails and great to hear what is going on in the magic world.I’ve tried for over 15 years to find someone to take over SYM Assembly No.4 without success and we are down to only 3 to 4 people at our meetings, so I announced last month Assembly 4 would no longer meet after January1st.  GOD WORKS IN MYSTERIOUS WAYS. WE HAVE MET FOR THE PAST TWO YEARS AT VICTORY CHURCH OF THE NAZARENE IN ST PETERSBURG.Last month we got a new minister that moved here from Oklahoma and he has a 12 year old son crazy about magic. Last week I told him after church on Sunday I would spend an hour with him to teach him some magic as he already has said he will join the SYM.He showed up with FOUR of his school classmates, and now they are all interested in the SYM and want me to continue after the Jan 1st and they all promise to help get more kids involved.

I’m 79 and not in good health with my back healing very slow. The open hole had to be enlarged to eight inches by seven inches and that is too big to pull together to stitch so some skin was taken off my legs and thighs to try to cover part of the hole. but the doctor said it will be a good four more months before the skin will heal itself. The hole is now twice the size in the attachment because the day after the photos were taken I had to go back into the hospital to cut out a larger section to get the rest of the cancer and do a deeper skin graft.A nurse still comes every three days to change the bandages on my back and pack the hole with antibiotics and a treated special gauze.  IT IS NO FUN AND I AM NOT A HAPPY CAMPER.”

BROKEN WANDS
Rev. Dr. John Booth  1912-2009, passed away this past week. Very respected in the magic field, Dr. Booth started in the field at a very tender age while in his early teens. He was the organizer of conventions, a well known and sought after performer, a lecturer, a recipient of numerous awards including the Magic Circle’s John Nevil Maskelyne Prize and was inducted into the S.A.M. Hall of Fame. His travels took him around the world. Dr. booth was a magic inventor, prolific writer with hundreds of articles to his name in many major publications as well as several books. Dr. Booth was also an ordained minister. His loss is an immeasurable one to the world of magic. May he rest in peace.

With much more than just a heavy heart that I report on the passing of a kind and gracious lady that our family had the honor of calling our friend and that our sons called Aunt Thelma.She fought, for years, a battle with emphysema which finally won the battle this past Friday, November 13th. Thelma was a loving, giving soul who will be very badly missed in the South Florida magic scene and by all who were fortunate and blessed enough to meet her.She is survived by her loving and devoted husband of many decades, her sweetheart since she turned a teenager and through the days of WWII when he fought as a SGT in the Marine Corps, Iwo Jima era; Harold Greenbaum; daughter Rochelle Krakower; grandson Dr. Scott Krakower; and the youngest grandson Jonathan.Words fail when it comes to counting the numbers of those of us who were touched by her and the Greenbaum family and who will forever hold her in a dear place in our hearts.