Greetings, it is a cold and blustery morning here in Miami, much like it has been for the past week to ten days. A highly unusual cold front has moved into the state and we have broken many records that go back many years, including snow falling in several parts of the state and freezing precipitation as far south as Key West. Not a good situation for those of us who live here and whose houses and clothing are not the best for those conditions.

This was a very busy week for me. Starting with Friday and ending with Sunday evening, I performed a total of 12 shows, most of which were in park conditions, all of Saturday’s mostly under freezing sprinkles. Friday afternoon was my every other week storytelling at the park at the Bay Harbor Isles, Saturday I was booked all day, as I have been for several years now, at the Redland Festival at Fruit and Spice Park. Late Saturday afternoon I had a birthday party for a 5 year old whose birthday party I’ve performed at several times. Sunday rolled around with freezing and icicles dangling everywhere but it was back to the Redland Festival for a full day of entertaining before heading out for the annual banquet of the Magic City Conjurers / S.A.M. Assembly 280, where it was my honor to bestow the title of Dean upon Fantasio, a man we all admire, respect and love and one who received the award humbly, as was to be expected.

Here are a few photos of the freezing in South Florida as well as the mini snowmen that were being made by some, note that the eyes on these snowmen were made from raisins because we don’t get as much snow as other parts of the country but it is snow and lots for an area that is normally in the 80s or higher. We have spring and summer to look forward to!

Until next time..….keep a dream in the making for you create your tomorrows by what you dream today.

At the Annual Award’s Banquet of Magic City Conjurers / S.A.M. Assembly 280, on January 10, 2010, Fantasio was named named Dean. The title Dean is a lifetime one and one that is not bestowed without a great deal of thought, research and consideration. After several months of discussion, and unanimous vote result, Fantasio was selected.

The presentation was made by the club President, Maria Ibáñez, who read letters of congratulations from many of his friends including one from S.A.M. National President, Most Illustrious Mike Miller; and others from Norm and Lupe Nielsen, Eugene Burger, Sonny Fontana as well as one from the Secretary General of FLASOMA and close personal friend of both Fantasio and Monica, Hector Carrion as well as numerous other letters, each of which made his eyes water a little more.

Thank you all for helping us keep the secret and make this such a special presentation for such a deserving man.

It was a very emotional man who stepped up to humbly receive the John P. Delaney Service Award from The International Brotherhood of Magicians Ring 45, Syd Bergson Ring in Miami. This plaque was presented by Ring President, Jeff Silver, after a lengthy explanation of just how special the man was and how meaningful the award is, to someone who is always there and without whose help much would not take place but at the same time someone who is quiet, unassuming and working in the background.

How very proud I am of my husband on this award and how very thankful I am for all his support!

Hey everyone it’s Jamie from Magician’s Gallery! Here’s a Quick Heads up on a One Day Magic Convention coming to Atlanta!

The Magic Comedy Jam Convention can only hold 135 people & will SELL OUT!

You are one of the first to be alerted. Go check it out at: http://www.MagicComedyJam.com

Boca Raton resident Rober, (pronounced “Row-Bear”), will present a full evening of Magic and Grand Illusion Show at the Township Center For Performing Arts on Saturday, January 30, 2010 at 8:00PM.

Rober has appeared on numerous cruise lines, and various hotels and casinos from Atlantic City to Japan. This special performance will showcase his entire repertoire of incredible magic and illusions that rival many magicians on the Las Vegas strip and other stages.

Magic fans of all ages will be thoroughly entertained by Rober’s award winning classic Dove and Manipulation Act, they will enjoy his Comedy Magic, witness amazing Stage Illusions and be dazzled when Rober levitates an audience member. As if that were not impressive enough, another lucky audience volunteer will be cut in half by Rober! 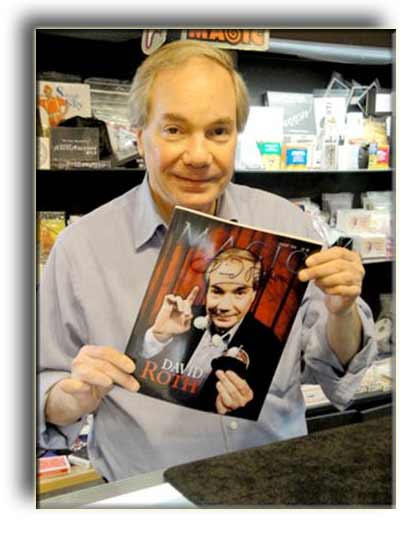 The new issue of Magic Magazine is here, and Fantasma’s own David Roth is the cover artist this month!Many of the pictures in the article were taken right here in Fantasma. You can see David Roth performing for customers and jamming with other expert magicians at our NYC store.David Roth is the greatest coin manipulator in the world.His teaching materials and accessories are invaluable to anyone who performs coin magic or wants to learn. At Fantasma, we carry the entire collection of David Roth’s products, and we also have exclusive videos available through our Fantasma Digital Downloads service.Check out the FDD site to see David perform and explain some of his favorite effects.

If you visit our NYC flagship store on Sundays or Mondays, you can always find David behind the counter, ready to talk about magic with enthusiasts of all skill levels.Plus, if you come in this month and purchase a copy of Magic Magazine, David will autograph it for you!

The entire collection available from Fantasma.Don’t forget to check out his exclusive Digital Downloads too!

Bob Little to be Honored by S.A.M. and you can help

Dave Goodsell here. This note to you is in reference to:
1. Honoring Bob Little at our national convention
2. Honoring outgoing and/or incoming S.A.M. National Presidents

IMPORTANT: RESPONSES TO THIS MESSAGE SHOULD GO TO DAVID GOODSELL: superg13@comcast.net

As you probably know, our S.A.M. National Convention in Atlanta, GA, will be dedicated to Bob Little, one of the most beloved characters in magic.

As editor of the convention program, I am responsible for gathering ads for the

program. I suspect that many of you will want to let Bob know how much you appreciate his commitment to magic and his wonderful “Wild, man, wild!” personality. You probably know, too, that there is no more generous person in magic. The number of people whom Bob has helped, always behind the scenes, is legion. This is a wonderful opportunity for us to let Bob know that his contributions to magic and magicians have not gone unnoticed.

I would like this to be the best convention program we have ever published!

We have tapped into several sources to put together a contact list for this email. We are aware that not everyone can or will choose to place such an ad. However, in working on past convention programs, we have had people tell us after the fact that they wished they had known about it and how to place an ad. At least you know! <G>

You may wish to place personal ad, or perhaps get a few friends together to place an ad. You may encourage your assembly to place an ad. You may decide to combine a tribute to Bob with congratulations to outgoing and/or incoming national officers. Perhaps you would like to place a congratulatory ad to outgoing National President Mike Miller and/or incoming president Mark Weidhaas. Or you may want to place an ad unrelated to any of this, simply as a promotion or as a greeting or note of friendship to those who read it.

We are hoping that magicians in Georgia will want to place ads welcoming the convention to Atlanta. Many S.A.M. members there can run such ads through their non-magic businesses.

Whatever you decide to do, please email me so that I can plan. I have attached a pdf with information about placing an ad. 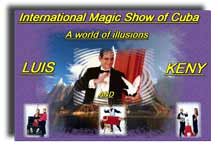 It is fortunate that Suite 101to the charismatic Cuban magician, Luis Rodríguez, who with his long history of thirty plus years experience in the art and its quality as a professional, has gained wide popularity in Las Palmas de Gran Canaria, where he displaysmagnificient”International Magic Show of Cuba”

Here’s a great write-up about Dr. Bruce Rubin, our wonderful friend, our favorite pediatrician in the world, and on the world’s experts on cystic fibrosis.I’ve been one of his oldest “pediatric” patients for many years, and I trust him completely.For the full introduction by VCU’s Medical School Dean.

The Imaginarium of Dr. Parnassus

The Imaginarium of Dr. Parnassus: a movie review
By Peter Rainer Film critic 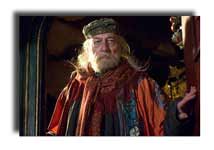 Terry Gilliam, whose new film, “The Imaginarium of Doctor Parnassus,” is Heath Ledger’s last, is one of the rare directors who suffers from having too many ideas. Typically his films, which also include “Time Bandits,” “Brazil,” and “The Adventures of Baron Munchausen,” are so manically charged with curlicue plotlines and outré visuals that it’s difficult to settle into the experience and enjoy the ride. Every movie he makes has a do-or-die quality, as if his head would explode if he didn’t get everything in it onto the screen. 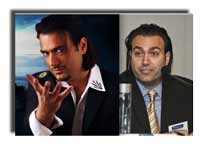 Maybe it should come as no surprise that Google’s Director of Security is also a “mentalist” magician; few can better sell the illusion of ironclad internet security, after all, than a master of deception who fooled thousands of NBC viewers.

The word “magic” is derived from the Latin word “magi” (used since the 4th century to describe the ability to read the stars and manipulate the fate that the stars foretold), and performances we now recognize as “conjuring” have been practiced for entertainment throughout the ages. The same level of ingenuity has also produced famous ancient deceptions such as the Trojan Horse, and for cheating in money games since time immemorial!

Director of National Intelligence Dennis Blair has asked a former senior CIA official to head a bow-to-stern review of the Christmas Day intelligence failures, Blair’s press team announced today.John E. McLaughlin, who served as the acting head of the agency in the George Tenet-Porter Goss interregnum, will “head a small group of national security experts who will look into recent challenges facing the Intelligence Community,” a statement reads…

The imaginarium of Dr. Parnassus