Greetings, it is a quiet day, hardly a leave is blowing and it is very overcast here in Miami.   There’s a storm brewing in the distance and we are told there is a 90% chance that it will intensify and develop into possibly a hurricane – phooey, and it is only August 2 which means we have another 4 full months of watching the all too familiar weather channel.   Shouldn’t complain though, after the earthquake experienced in San Diego, I am thankful that at least hurricanes give us a few days warning unlike the weather conditions in other places.

A  busy magic week ahead of us. Tonight, there is a magic show at the Elks Lodge where we meet, Incredible Magic, with three stage performers and three close-up performers.  Thursday we have the I.B.M. Ring 45 meeting then on Friday we prepare to receive our friends Quique Marduk and Rey Ben who will be delighting us with a Day of Magic on Saturday the 7th as they stop in Miami for a visit on their way to the Magic Castle. Three days of magic in one week….it doesn’t get any more “magical” than that!

It is so hard to believe that the end of this month our first born will be celebrating his 33rd birthday!  I remember well that it was only yesterday that we were in the hospital anticipating his birth and here we are all these years later.   We are very proud of our son and all his accomplishments and wish him the happiest and healthiest of birthdays this coming August 31.  Happy birth month Orlando.

A busy magic week in Miami this week with two events taking place as follows:

Reservations are pouring in and they space is limited to the first 50 people so don’t be left out.  Make your reservations today,  seating will be assigned in the order of the payment of registration. 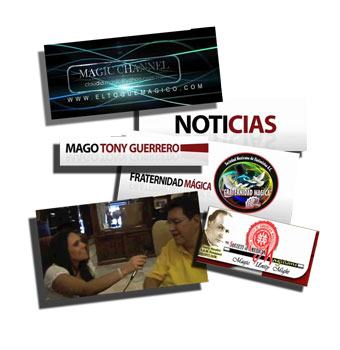 Congratulations to Tonny Guerrero on their interview and news coverage recently.  They continue working towards the promotion of magic in Mexico and towards uniting magicians towards the same cause.

They will be hosting a fund raising event on behalf of Rachel Wild this coming August 3 in Mexico D.F.

I know many people as well as Aldo & I have been very anxious for the results of today’s tests.

This morning I went to have a stress echo to determine whether or not I had congestive heart failure as a result of the damaged valve and subsequent infections.

We have good news and bad news!

The good news is that at this point I am not suffering from congestive heart failure; the valve is regurgitating blood quite severely in a eccentric manner (meaning that it is more prone to infection than ever) but for some reason my heart is compensating with the help of medication and has not yet begun to enlarge.

The bad news is that it is merely a matter of time until this happens.

Of the three cardiologists involved, two say that surgery should be immediate however they also agree with the third cardiologist that the surgery will not improve my quality of life but may be the way to go to avoid complete transplant should the heart fail and  become unable to support a repair/replacement at a later date.

All of them also agree that the chance of infection during and after surgery could also be catastrophic and therefore we have decided with our main cardiologist that the best answer at this point is to continue medication, try as best as we can to stay free from infection and monitor closely the subsequent deterioration as it is inevitable that the heart will begin to fail and as soon as that happens we will proceed with surgery.

They will be providing me with a CD at the beginning of next week to send to Mount Sinai, NY to a cardiovascular surgeon there who is prepared to accept me as a patient when the surgery becomes imminent

At this point I will be returning regularly for echo cardiograms to monitor the deterioration. In some ways we are glad that this has “bought us a little time” to continue to raise some funds for the operation but also anxious as it feels like I am a walking time bomb, as we know that the heart could begin to fail at any time, the goal is to catch it as soon as it does so that we are not faced with an even bigger dilemma (transplant).

In the meantime we have also received a chest x-ray result from the insertion of the pic line and it is showing 2 nodules on the right lung. The cardiologist today says that these are hopefully benign and a result of pneumonia that occurred just before the endocarditis. I have been advised to have a cat scan to confirm that this is hopefully the case.

I would like to send a huge thank you to everyone who has emailed, called, donated, prayed and kept us in their thoughts during this difficult time. We know that the road ahead will not be easy and that we will have to face the inevitable when it happens. However all these thought and prayers, support from the magic community and last but not least the amazing dedication and love from Aldo have and continue to sustain me.

Thanks once again to everyone, please keep us in your prayers and I will continue to fight the good fight!

[Left – Germain’s father carved these wooden figures of Egyptian serfs for use in the young magician’s vanishing doll trick, circa 1900. The pair, 7 inches high, sold recently for $6,000. Photo courtesy of Potter & Potter Auctions.]

“Though eyes turn dim, and ears mere ornament,
May we with inner senses sense beyond.”

There is a subtle, invisible essence generating from all things. That’s a basic magic belief. Magicians in every culture have attempted to tap into and manipulate that essence since the beginning of time.

Karl Germain a magician-illusionist in the early 20th century was no different. What made him different was the grace with which he performed his feats. 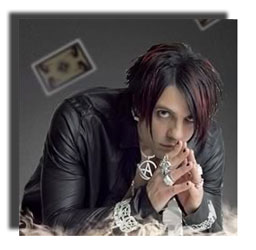 In season six of “Criss Angel Mindfreak,” the world renowned mystifier amps up his unthinkable escapes, fearless demonstrations and mind-blowing feats testing his own limits and that of his audience in six epic one-hour specials. He brings the series to new heights with a spectacular attempted jump across the Grand Canyon on a high performance hybrid motorcycle. He will either miraculously reappear in a locked cage dangling from a hovering helicopter… or plummet 4,200 feet to his death.

What better way is there to pick up a new hobby than to borrow books from the library? Next to none and Magical Michael Steele is living proof of that fact.

A Sedona, Ariz., resident and traveling performer, Steele is a magician, professional yo-yo’er and a substitute teacher who will perform at the Loma Colorado Main Library Wednesday afternoon.

Inspired by a school demonstration when he was 11, living in a suburb of Los Angeles, he started learning how to do tricks with yo-yos. Practicing at home and entering contests, his skills improved and it became a lifelong hobby.

Man of Many Masks

Better than Hogwarts: Jeff McBride and a few of the Wonderground Players.

Walking into The Olive, a Mediterranean-style lounge on East Sunset Road, is like stepping through Alice’s mirror, and the Wonderground on the other side is more magical than Lewis Carroll’s rabbit hole and equally overwhelming. On stage, a pair of belly dancers moves rhythmically, mimicking the twirling smoke of sweet flavored tobacco rising from dozens of hookah pipes. Against a wall, illuminated by a single bulb, an artist paints a half-naked woman into a colorful bird. At a nearby table, a man donning an evil grin and a fedora slides a razorblade into a card box and, with a few shakes of his wrist, surgically removes the pips from a four of diamonds—his spectators’ selected card. An experimental film is projected on a blank wall; green fairy lights are scattered across the floor, and at the center of it all is the man of many masks himself, Jeff McBride.

Even after 10 successful years as Harrah’s afternoon headliner, comic magician Mac King often is asked, “Why are you still doing a daytime show?”

The question is a backhanded compliment of sorts; an entertainer who lands a nighttime Las Vegas gig is considered to be a major success. So those who think King should be doing a night show are saying he’s good. Really good.

Few of those questioners consider King’s reality: He’s quite satisfied with his 10-year reign over daytime Strip entertainment. And there’s nothing he would change.

This just in from Harry Allen at Daytona Magic

Just added to the lineup at Daytona Festival of Magic

A benefit show on behalf of Rachel Wild, organized by Tonny Guerrero, is being hosted in Mexico D.F.